The marital bonds reared their ugly heads once again, just to rub Sami’s nose in her betrayal. It was a surprise that Marlena didn't even ask Sami anything about her wedding to Rafe. It’d be nice to see that addressed more in depth.

The Horton Christmas:
With the Brady gathering such a dramatic affair, it overshadowed the charming Horton Christmas Tree trimming party. Many complained that it wasn’t as lovely as the previous years. Could it be because it can be difficult for some to see newcomers to the Horton family getting their own ornaments? It’s a good way to welcome Victor, Mel and Daniel into the family. Vote on your thoughts on the Horton Christmas.

Kidnapping.
The website hacking storyline was so slow to progress that it was surprising to see such an expedited and excitement filled ending. It was really well done. The bozo kidnappers were pretty sad. Just like regular DiMera henchmen, but DiMera henchmen wouldn’t have killed a DiMera, so who hired them? We saw progress with Chad and Mel, who betrayed Abigail’s trust, but how much does it matter if Abby’s got eyes for the old fart Austin? This will have magnified since he saved her life.

Nicole knocked on the door of the sprawling DiMera mansion, instead of ringing the doorbell.

Rafe was engaged to an Emily Hudson and Quinn’s last name is Hudson. Is something going to be made of this or is it a coincidence?

That DiMera sofa has been ridden on more times than the Salem bus. Hopefully Nicole will use the Nate Berkus gift certificate to commission a new one.

Here’s a taste of SOF's Matt's DOOL Musings: "As Austin jogged across town, Abby bumped into him and spilled her coffee all over the crotch of his shiny track suit. As she stared at the wet spot she'd left there, he assured her it was 'no biggie'. Apparently she found this charming and they recalled his brief boxing career." 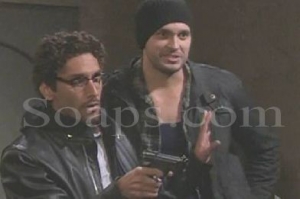 Credit: "Cough up that furball." (Soaps.com)

A lot went down this week on the show. There were early Christmas celebrations to get you in the mood, filled with drunken debauchery and family skeletons coming out of the closet. Just another week in Salem, or as Lexi said, “Compared to my family’s drama, that was nothing!”

Kate’s ‘help’.
Kate trying to help Sami gain respect from Madison has to be part of her scheme to get to Madison, but could Kate really start feeling empathy toward Sami? Their scenes are riveting. Old school.

Marlena means well.
She wasted her breath. Nicole knows what she’s getting into and is more of a DiMera than Marlena knows. Her unsolicited advice was like trying to get Stefano or EJ to stop being well, DiMeras. Still, there was something in her warning that worried me for my Nic Nic.

Creeper alert:
What was with the children’s reaction to their uncle Austin when he arrived to help trim the tree at the loft? Notice they just gaped at him? Do they sense that he’s a creeper about to fall for young Abigail?

Alice’s many secrets.
A cryptic scroll was inserted into a Christmas ornament. You know, because that’s what little old ladies do in order to keep their granddaughters busy long after their death. Alice knew Hope wouldn’t want to do anything so tedious such as work at SPD. The call to Susan wasn’t one of the best moments of the week for some of us who adored Eileen Davidson in the role. Susan seemed more on edge than she ever was in the past. She was more of a caricature of Susan than anything.

Sami has three kids.
Sami railed at Carrie about it being John’s fault that Johnny was shot at but what about Allie and Sydney? Allie’s going to have so many issues when she grows up. Syd as well, though not if EJ kidnaps her once in a while in order to keep Sami interested.

A new mommy and daddy.
Ciara arrived at the Horton Christmas Party with her new parents, Doug and Julie Williams. Instead of sending kids off to boarding school, they just send them to grandma’s house these days. Poor Scaroline knows all about this. She takes care of Sami’s kids so often that Kayla’s got to come home for Christmas to run the pub for her. Gal’s got no time! She’s too busy running a daycare or is that Rafe’s job now?

Cranking up the drama.
The peacemaker, Carrie, brought Marlena by the loft. It’s the holidays, and she’s delusional. It’s Sami’s loft and she shouldn’t have to feel uncomfortable about a guest in her own home. Then again, should she have invited Marlena for the children’s sake? Marlena shouldn’t have forced herself on Sami but it seems this scene was to show Doc Will’s struggles. It wasn’t surprising that Rafe sided with Carrie, since they’re two peas in a pod and Will was sure glad Marlena turned up. He was in full smirk. He won’t be smirking when he notices Gabi’s crush on Chad. Or will he care since he bats for the other team anyway? Best line? “You know how I hate to do the right thing,” Sami declared. Then she really did try, well, for a few moments. Many fans called her a hypocrite when she went off on Marlena for cheating on John so long ago but if she doesn’t know that Will witnessed the act, is she really a hypocrite? Once she realizes it, she may start understanding Marlena more. Course Sami’s pretty black and white.

Oh Will. Lucas is a recovering alcoholic, and now Will is drinking. Could this be teen angst or something more? It’s a perfect time for Lucas to return. Will Sami confide in her bestie and will he say, “Oh Sami how could you?”