What’s she really feeling?
Why did Sami sneer at EJ when he mentioned being in love with Nicole and wanting to have with Nicole what Sami has with Rafe? Hatred or jealousy? Vote in our poll, Sami’s reaction to EJ admitting he loves Nicole.

How many secrets could there be?
It’s great to hear about Alice but this constant discussion about Alice’s secrets feels like overkill. It’s one after another, after another and come Monday, Hope finds a little note inside an ornament of all things! It doesn’t seem plausible that Alice would have any secrets. Did Susan Banks even know Alice Horton?

Sami reassures Madison she’s a hard worker by sneaking out of work.
There was nobody at Titan so Sami did a little work and took an early lunch at the spa. She didn’t tell anyone where she was going, and then after she was admonished by her boss rather publicly (ouch), instead of going back to work and completing her day, she went home with Rafe. That there is a hard worker.

Shouldn’t Rafe have stayed out of it? The whole thing was embarrassing.

Scum.
"Something happened" higher up on the police force and now Roman can’t touch slimy Quinn? This scumbag needs to in pure and simple terms, (excuse this) get laid. He can’t stop hitting on Kate and doesn’t seem to get it that Stefano freaking DiMera is her husband. Every woman he’s around is a potential bed-mate to him. What a skeeve.

The meltdown.
Has Maggie’s place turned into a flophouse or is it just a place where you can go to use the kitchen? Poor Will. I felt his heartbreak and Gabi’s ache over their break-up. I also felt for the food.

Is the writing on the wall?
We’ve done the Ponzi scheme storyline, we’ve made Alice Horton, advice-giver and doughnut-maker extraordinaire into the keeper of secrets and now we’re on to a Lolitaesque storyline. Feels like we’re playing "Jeopardy!" – "I’ll take ‘middle-aged’ professors who fall for their 20 year old students for $200, Alex." Who assumes that something will start up while she’s his student ala "Pretty Little Liars," and someone will blackmail them over it?

Lexi to EJ, "I’m done with you."
EJ ‘says’ his original reason for running for mayor was to change the opinions of the people of Salem in order to give his children a better life without the stigma of growing up a DiMera. But he’s alienating the family, the most important people. Shouldn’t he care more about what Lexi thinks rather than what a bunch of anonymous people think? He’s always the first one to point out that he hasn’t been convicted of any crimes, so why care about those anonymous faces?

Remember, he’s still doing tricky, underhanded things. The very same things that the people of Salem can see and therefore judge him for? Is he the most delusional person in Salem right now?

The best line of the year goes to Kate. "I'm Kate DiMera and I'm not afraid of anything." Best line of the week: Nicole to Jennifer, "You're cute. I'm scared."

Here’s a taste of SOF's Matt's DOOL Musings. "…Sami, who had been playing hookie from work and hanging out at Quinn's new spa, 'The Unhappy Endings Massage Parlor And Fight Club.'" 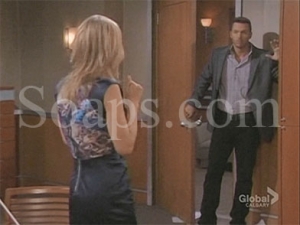 These are the “Days” of my week from November 28- December 2:

The theme of the week is trash. We saw John trashing his lovely cell, Will trashing a kitchen, and Nicole trashing Abe’s reputation.

Website hacking.
Could Tad be behind the website hacking? Only if someone is pulling his strings. Could it be EJ? He’s always doing something illegal. Or Quinn? Maybe he gave up hookers for gambling and returned to Salem to be close to his new line of work. The day spa has to be a cover for something illegal. It is Quinn, after all.

To make out or not to make out.
So it’s okay for Jennifer to make out frantically with Daniel but not Jack? She knows she hurt Daniel when he caught her kissing Jack, but doesn’t care about how Jack would feel if he spotted her lips on Daniel’s? Maybe she should pick one already, before one of them dumps her. She knows what she’s getting with Jack, but who knows what she’s getting with Daniel, since they’re still in the honeymoon phase. Find out what Jenn’s portrayer has to say about this in Lori’s interview with Melissa Reeves.

Such a tease.
Madison got Brady half naked before sending him on his way, unsatisfied. Is she always a tease, or is she protecting him? Either way, it’d be nice if she’d cut it out.

Heart wrenching.
Abigail was suddenly nice to Jack again. She can turn it off and on about as well as Madison. It was lovely of Jack to send Abby’s article in to a journalism contest. It’s also great to see him not focused solely on his PTSD and actively seeking work. How absolutely horrible it must have been for him to hear the cries of his friend being tortured and murdered. Matthew Ashford’s doing a bang up job with this storyline.