Meanwhile, what was with Rafe’s chat with Johnny? Johnny asked where his mum was but instead of merely saying his mother was caught in traffic and is trying to get home, he tells the kid Sami’s not there because "sometimes people say things that they don't mean and she'll forgive them no matter what, because she loves them." Get a friend, dude!

Nicole’s admission.
True to soap opera style, Nicole picked an inopportune time to confess her love to EJ. He was shocked yet pleased to hear and tried to make it two for two and get her on to the sofa, Samanther style. Did he even shower beforehand?

It was a nice surprise to see Nic befriend Madison. Hopefully we can explore that more. Nicole is sure going to need a friend after she hears about EJ’s extracurricular activities.

Bye bye John.
Boy, Judge Weston means business. She is obviously in no way affiliated with the Brady family. Because John refused to make a statement about how sorry "he stole all the dough from the pensioners," she gave him 50 years in prison. Ouch. Hey Marlena, Roman’s still single.

Unanswered question.
If the masked ghoul at the Halloween party wasn’t Jack, then who was it? This hasn’t been answered yet and it’s been weeks.

Here’s a taste of SOF's Matt's DOOL Musings. "John noticed Marlena was trying to cry but the tears seemed trapped by the Botox. After he pulled at the skin, one managed to escape as he was led away to the cells." 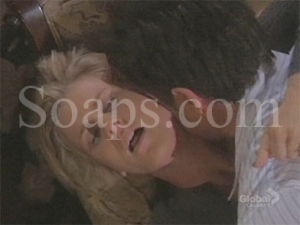 Our visit to Salem this week was cut short for Thanksgiving. We caught a glimpse of some of the Salemites celebrating by donating canned goods to the needy and dining together. Best scene? Victor peeling potatoes good-naturedly.

Aubigail?
Abby was happy to spend quality time with Jenn without Lord Voldemort. That’s like calling Jack Hitler or something. A bit much especially for someone who claims to want to work on their issues. So instead of working on their issues, she had a little transference going on with elderly Austin Reed. They had zero chemistry and shared two awkward hugs. He gave her a fugly toque when she was chilled just like he gave her his bone marrow when she had leukemia as a child. Now? She’d like him to throw her another type of bone…

And she’s the best detective they’ve got.
Observant Hope walked by the duplicate photo of the mystery baby at Stefano’s mansion but didn’t notice because she’s a cop at Salem PD. She and Stefano have great chemistry. It’d be nice to see them involved in an adventure together again.

SPD gets away with shotty police work yet again.
Rafe and Will found Johnny under a table at the pub last week and still the SPD hasn’t been under investigation. You can tell Sami’s a Brady and Rafe’s a Brady-in-training because neither of them blamed SPD for not finding Johnny underneath the table. I’m not sure what EJ’s excuse is. Relief that Johnny’s alive?

History repeats itself?
Sort of. In 1993, Sami was rocked when she witnessed her mother cheating on Roman lasciviously with John in the Titan conference room. She was never the same after and Will won’t be either, unfortunately. If Bo and Hope had done this when Zack died they may have bypassed all their relationship woes. Only EJ and Sami could get off on placing blame, arguing, screaming, violence and vicious behaviour. From the grunts, we were led to believe they had sex fully clothed. I thought they were just dry-humping. It was enough for Will to become traumatized and throw up after witnessing. Even EJ and Sami were traumatized after coming to their senses and realizing the horror at what they’d done.

Sami has done a lot of things but cheating has never been one of them so this is extra sinful and she feels extra guilty. Of course, not that guilty. She stopped for a manicure and a change of nail polish after sex with EJ. She likes to do EJ in black nail polish and Rafe in blue.

So has Sami come full circle? Will she understand Marlena and John in a way that she never could? It’s not quite the same is it, because Ejami had sex to block out their feelings of loss and grief while Jarlena had sex in order to express their love. Is Will going to keep this a secret? Will Sami turn to Marlena to discuss? Eventually Rafe and Nicole will find out. Then what? Vote on what Sami and EJ should do.

Best line: EJ “If you’re such a good mother, why do your kids always end up dead?”