Stiff upper lip?
Marlena was rather clinical when it came to helping Sami through her grief over Johnny’s disappearance. Honestly it didn’t even seem as though she was affected by it until they thought Johnny was dead. Even then, she didn’t shed many tears over it because it wasn’t about John. Marlena has always had John up on a pedestal, her feelings bordering on obsession. Even now, after the pub showdown, she still argues with John that the family is safe around him. I suppose even an esteemed psychiatrist can’t step outside herself to see the forest through the trees when she’s fixated. It’s difficult to blame her for not being there for Sami for the past four years when she didn’t show up for Grace’s death, Sami shooting EJ in the noggin, marrying Rafe or when RoboRafe (may he rest in peace) and EJ made her life hell, because the characters were off-screen and all but forgotten by Higley and Corday, but right now, Sami’s right. Marlena’s not there for her. Some will argue that she’s only really ever been there for her perfect little daughter Belle or for John. This is a good time for them to rehash the past because of what’s to come this week with Ejami when the past basically repeats itself.

Marlena actually thought the DA of all people would have compassion for all that John has done for Salem and go lenient on him. No princess, the DA isn’t a Brady, so John’s in the real world now.

A "DOOL" poster, "ru4real78" sums it up in one sentence. "I think this last stint of John and Marlena returning has been the worst."

"They fight just like the "Three Stooges."" – Matt Purvis
Ejami swatted each other, pushed each other around like two kids at the playground. The screaming matched turned to something more sinister when they started making out. Violence usually precedes sex with these two so you know what’s coming next. Vote in our EJ and Sami kiss poll.

Go back to Paris.
Quinn’s offer to help EJ find Johnny was so random and as annoying as a gnat.

Biggest mistake.
Kate lent Sami support which was done to perfection. It was also good to hear Will remember what life with Lucas was like growing up. It’s good to see that rich history brought out especially since we all wondered how Will would turn out with Lucas and Sami for parents.

Special thanks to Matt for writing out that sammich quote. 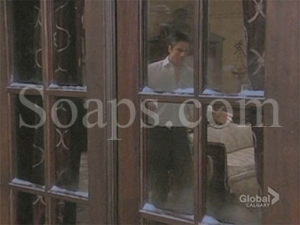 How ironic that Corday blamed Higley for what went wrong with “DOOL” when the same storylines are being recreated within weeks of firing her. Maybe he shoulders most of the blame?

Jenn sandwich.
There hasn’t been much screen time dedicated to Jenn dating her harem. Daniel hasn’t been seen nearly as much as Jack but he did have an extraordinary conversation about the weather with Jennifer.

Daniel: “Well, you know you can’t control the weather. Right?”

Wait. What? These days. You mean we could control it in the past? Did Stefano and Rolf create a weather controlling device that broke down before I started watching in ’94?

It’s hard to say whether or not Jenn went overboard in her anger toward Jack this week. She’s pretty pious, very black and white but Jack has always been sort of grey. He seems sincerely confused as to why it wasn’t a good idea to fake sleep while she was pouring her heart out to him. That could cause issues in the future for them if they stayed together but for us, it’s entertainment. He’s being written like a kid in a candy shop who needs to learn self-control.

Sami and EJ show.
Johnny went missing during the shooting but nobody searched the pub. The ineptitude of the Salem PD is remarkable. Then, Roman arrests Quinn, gets a call about a possible break in Johnny’s case and tells Quinn to “Get Lost.” A good cop would have called for back-up and had Quinn taken downtown but Roman chose to ignore the law as it suits him once again. No wonder Sami never knew right from wrong. Does that mean the arrest doesn’t stick? And why is he allowing non-cops to help him with the investigation? Isn’t that a liability?

Sami put on the hysterics and raged on everyone – something we have been blessed not to see in months. She blamed everyone else for Johnny’s disappearance possibly because it was easier than admitting that she was at fault as she blamed everyone else to be. Poor Rafe and the sandwich got the brunt of it. Sami: “You think that sandwich is going to make the difference? You think if I eat that sandwich, he’s just going to walk through that door? You think this sandwich is the difference between that bloody shirt being his and not? Your perfect turkey sandwich is not going to bring him back. It’s not going to change the fact that we went to that pub because of you! It’s your fault that we were there and this sandwich doesn’t change that!”