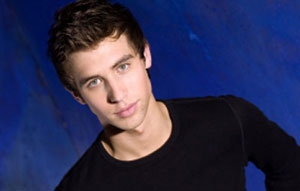 Blake Berris plays the brainiac loser-in-love Nick Fallon on Days of Our Lives, but this fall he will be taking on a new role. Recently cast as Corey on the USA Network series “The Starter Wife,” Berris will be taking a stab at primetime.

“The Starter Wife” stars Debra Messing as Molly, the ex-wife of a Hollywood entertainment mogul who rebuilds her life after being left for a younger woman. How will Berris’s character fit into her world? Since we know Blake has chemistry with the older ladies, as evidenced by Nick’s role in the hay with Billie, on Days, we think he’d be the perfect boy toy for Messing’s character! But, of course that’s just us!

While we are happy for the actor’s success, we have to wonder what this will mean for Nick’s future in Salem. Since he hasn’t had much of a storyline since Chelsea broke up with him and he got his grant, could Nick be on his way out of town, or will the actor pull double duty? We’ll have to wait and see, but if we had our way, Nick would stick around and find a red hot (or cold fusion) romance with someone new!

Son of Joshua and Jessica Fallon, nephew to Mickey and Maggie Horton and great grandson to Tom and Alice Horton, Nick came to town in 2006. He started out as the stereotypical science geek, but blossomed when he met and fell for Chelsea Benson. Although he initiated an online relationship with her under false pretenses and slept with her mother, he eventually won her over. The road to love was not a smooth one however, as the young couple hit a few snags, namely Willow Stark, China Lee and Jett Carver. Things started to look up for them though after the campus rapist ordeal was put behind them, but then Dr. Daniel Jonas came to town and stole Chelsea’s heart. Although heartbroken, Nick found professional success, winning a grant to develop his alternative fuel source prototype, but learned Max had a secret hand in assisting him. Currently, Nick spends his time helping Max figure out what Dean Robbins is really up to.

Soaps.com would like to congratulate Blake on his new role and will be sure to keep you posted on all the future details!