The mysterious baby photo.
Who is the child in the photo found in Alice’s box of memories and on the DiMera bookcase? There’s no writing on the back to provide any hint of who it could be but the list seems short. The baby's complexion is light so it may not be Tony, Lexi, Stefano or one of Kate's kids. Does that just leave EJ? If that’s the case, I’d find it rather banal, but there’s always a chance of twins. Could EJ have one or is the baby Chad or Nicole?

Does Maggie now live at the Kiriakis mansion? If so, it’d be nice if Jack or Carrie and Austin or all three moved into her house. It’s a piece of "DOOL" history that would be a shame to lose.

Chabby:
Poor Abigail felt so threatened and shocked by that sinsational kiss between her beau and her best friend that she can’t study. How did Chad not notice he wasn’t kissing Abigail and why on earth did Melanie not put a stop to it?

"Cafe."
Rafe’s job search was fun to watch but he didn't find much pleasure in it except for claiming to know Stan the Man, who he just happens to be married to. Carrie saved the day by offering him a position as a PI since he already had the required overcoat for the job. Was it just me or did these two seem to er...share a moment?

Okay, we get it. It's sugar-free.
Maybe there was something in that "sugar-free dessert" Stefano ate to make him forget how sanctimonious Abe is. Did he really think Abe would step down as mayoral candidate in order to take a job as Governor – a job I might add that Stefano would have pulled strings for Abe to get? It would never happen in a million years. Though it’s gratifying to see Kate scheming with Stefano, I’m a bit confused about why she thinks she could sue "Madison and her whipping boys." What did they do to her?

Bope renew their vows. Again.
It may have been thought of as necessary for Bope fans who stood by and watched their fave couple be desecrated at the hands of Higley, over and over. Yet - was it a little contrived? Did it take up too much time we could have seen other plots furthered? Have they renewed their vows so many times that you couldn’t care less either way? Or is this curiously just in time for Billie’s imminent return? You tell me.

Hey, at least they remembered they have a kid named Ciara.

Take a look at Beth’s first crack at writing captions for the screen capture section on Soap Opera Fan.

Here’s a taste of SOF's Matt's DOOL Musings. "She dug under the floorboards and pulled out some picked peaches which logically enough led to him remembering his lengthy nipple torture in Afghanistan, not to be confused with Brady's nipple torture from last week." 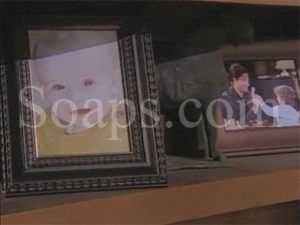 Credit: "Sure I know Stan the Man." (Soaps.com)

These are the “Days” of my week from October 31-November 4:

There are at least six mysteries going on this week on the show. They’re moving at a decent pace. That combined with the romance and love, one would think the show has never been so good. Still it’s not without minor issues, according to many posters who are finding some fault with the current writing. Let’s play Marlena – snootiness aside, for a few minutes and analyze the situation.

It’s not incest!
Many still think that since Maggie’s Dr. Blondilocks’ biological mother, he and Jenn are related. Maggie married into the Horton family, so they’re not blood related. They didn’t grow up together either so though it’s odd, there’s nothing really creepy about it.

Mysterious case of the hacking gambler.
Sonny, Will and Chad found the hacker’s ip address on their site which mysteriously led them to an exact location of the hacker’s dorm room and a shifty character, who showed them how to login to the hidden gambling section of their website. They were really concerned that the biggest crime lords in Salem, Stefano and Victor, would think poorly of them if they found out about the criminal activity on their site.

Mysterious Madison:
Madison’s certainly got Brady and Sami puzzled by her hot and cold behaviour. Being hot for Brady doesn’t figure in to her mysterious plans, I guess. Madison has treated Sami like an old friend since they were reacquainted, yet when Sami tried to protect her, Madison cuts their friendship out of the equation. It’s disconcerting. I’m not sure how these office politics would affect Sami’s job but maybe if Madison and Brady wouldn’t put on the heat at work, Sami wouldn’t feel threatened. We have to remember, this is Sami’s first job in about a decade, so it’s understandable that she’d be protective. “I thought you were more astute?” Madison asked Sami. Um. Astute? Two things: How so? And, does she really know Sami enough to assume that? That whole exchange was weird.

Lines between good vs. evil have always been blurred and with the new writers that hasn’t changed.
The DiMera’s are the bad guys and yet John Black thinks he’s above the law. It’s okay for him to commit a crime by removing his ankle bracelet and attend the town square Halloween party? Hard to fault him for laughing at the law such as it is in Salem and the holier-than-thou mayor of Salem, Abraham, not ratting out John because they’re besties was a given. It would have been a better plot point if Abe had done his job and sent John to jail.

Quinn returned to Salem a few months after police commissioner Roman told him he wouldn’t press charges against him for pimping if he left town for good. Will Quinn’s lawyer get the deal revoked because Roman never had proof of Quinn’s wrongdoings? Why didn’t he contact Vivian for her help instead of blackmailing EJ? Vote on Quinn’s return.

EJ sure caved to Quinn’s blackmail immediately, knowing that even if Quinn can’t provide proof of EJ’s past as a drug overlord, he can cause issues for his campaign and put self-righteous Abe right back in the mayoral seat. Then again, it’s just one of a list of other misdeeds that Salemites have already heard about.

Days of our Lives Saturday Teaser Poll: Not Enough Information