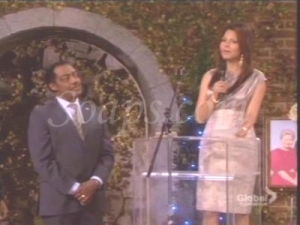 Will you vote for him? (Soaps.com)

The week started out very slowly. It gradually built up speed with Jack’s fall into the cake and to the cliffhanger of John Black’s arrest. Poor Victor! Right in the middle of his proposal, Rafe mistook the “Will you marry me?” banner for a sign that read, “Take down John Black,” and he did just that. Let’s dissect it more shall we?

Foggy notions.
I’m not going to lie. Most of the week, both Matt and I admitted we were in a fog. This, before EJ even fell asleep during the festivities. I could have done with three speeches total, and from three different people. Lexi’s speech seemed to be on a loop. I think she called herself Abraham’s wife about five times. In my fog that’s all I took away from it. She’s about as good at giving speeches as she is a doctor. Perhaps Abraham can give her another job.

Old Austin vs Nu-Austin, and then some…
When I started watching “DOOL,” Patrick Muldoon was Austin, yet I’m having a hard time getting used to him again. I miss Austin Peck. We were treated to a reunion between Kate and Austin at the party. I felt bad for Kate. Austin couldn’t have stopped by the mansion to greet her before the party?

Austin and Sami looked really uncomfortable when they greeted one another, which I found odd. Marlena asked Sami to get along with Carrie, but um, they’ve been getting along since last Christmas. Didn’t Will tell his grandma that in the daily emails? Marlena told Will that he could come to her if he needed somebody to talk to. Foreshadowing his eventual coming out?

I’d forgotten how much of a nag Marlena can be. When she pressured John about reconnecting with Brady, the look on John’s face was like, “Give it up!” Can we stop her from emasculating him?

Poor Kate was once again snowed by Chloe, which just means she needs lessons from Stefano. We got to see nu-Sydney but Ciara is still lost, not that I’ve minded. EJ got to talk to his kids, which I thought was sweet. Surprised? Me too, with all he has done, but I think because of the reboot, I no longer care. Maybe I’m trying to forget the havoc Higley wreaked on Salem for the past few years.

Keeping house.
Alice’s bank statements just happened to fall out of nowhere an entire year after her death. I’d call Jenn’s housekeeping skills into question but considering she also didn’t recognize her own husband of 20 some years sitting beside her half the night (week) at the party, that only leaves one question. Is Alice’s magical ingredient in her donuts weed?

Leading up to the big event…
Austin told Marlena about his SEC case where they’re investigating misallocation of corporate funds and her face darkened.

EJ declared his intentions to run for mayor, shocking everyone. Right after, I saw a campaign poster of his on a wall beside where Abby and Chad were talking. Did these posters go up before or after the announcement? Since Salemites were shocked by EJ’s bid, there’s only one answer. There indeed is a special ingredient in the donuts. EJ’s speech was hysterically funny. He has a dream for Salem where the riches are measured by the wealth of its community? He, a DiMera, wants to make Salem the greatest city in USA? He promised to get rid of the crime, drug lords, embezzlement and prostitution? Embezzlement eh? Best. Speech. Ever.

How rude was it for nobody to clap for him when he and the other DiMeras clapped for good ole Abraham?

Before John’s arrest, EJ elbowed his father so he could watch it go down. John was arrested for embezzlement, securities fraud and misappropriation of pension funds. Eh? He’s been busy overseas. His son-in-law, brother, and nephew are involved and his other son-in-law arrested him. Is there no one in Salem not related to this guy? John was never right after Stefano brainwashed him the last time so I was more shocked to hear Lexi mention Basic Black is still around than what John's been up to.

Romantic proposal:
It was sweet for Victor to choose Maggie’s parents’ dedication party to propose to Maggs. Unfortunately she didn’t get a chance to say yes.

Welcome back.
I’m glad he’s back but surprisingly I no longer care if Jack and Jenn are reunited. The writers seem to have rewritten him into a klutzy imbecile, which I hope is short lived. Jenn and Abby weren’t the only two in shock. Jack wasn’t even aware he was a divorced man. Course neither gal would let him tell his story, in true soap opera style. One of the sweetest most 'real' scenes of the week was Adrienne's reunion with her brother. So touching!

Am I the only one to see this?
Jenn requires a makeover. She’s gorgeous, yet the hair colour and pancake make-up aren’t doing her justice. Nobody rocks the pale faced, dark rimmed eyes and white lipstick look. I’d like to know…What type of disappearing cream does she use on that open heart surgery scar?

Princess vs Gladiator:
Gabi looked like a Roman princess; Abby’s gladiator outfit was um different, and Melanie’s was more of the style you may actually find in an old attic. Who did the dresses belong to and how come none needed tailoring?

Thanks Gus.
Nic had a spiritual awakening after her brush with death. I don’t want her to fit into the well worn Brady mold but using better judgment would be fine.

How about a poll? Vote on the best part of the "DOOL" reboot so far, and then I encourage you to read SOF's Matt's DOOL Musings. Here's a taste: "…even with all of this excitement, EJ still managed to fall asleep in the middle of everything. Or maybe he was just practicing to be the mayor of Salem."

Have a great weekend.