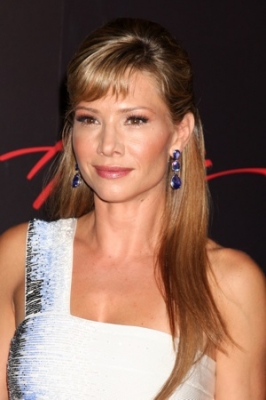 “The minute she lays eyes on him I think she has that little stirring feeling in her gut that makes her all tingly inside.”

Sarah Brown has joined the cast of Days of our Lives as the character Madison. In anticipation of her Salem debut on October 4, Soaps.com chatted with the actress, who has also starred on “General Hospital,” “As the World Turns” and “The Bold and the Beautiful,” to learn more about her role and what fans can expect.

Soaps.com: What can you tell us about Madison and how she fits into Salem?

Sarah: Madison is a wealthy, successful CEO of a cosmetics company that she built from the trunk of her car. She is tough. She is bright. She is driven. She is pushing towards becoming a global name in cosmetics. She’s already established a great brand within the United States and she has been very, very successful. Her product is on the lips of women everywhere. She’s an icon for…you know, part of her brand is who she is as a person and people looking at her and thinking, “I want to be like that. Do I want to buy the products she makes? Because she’s cool and she’s pretty and I want to look like that.” So, she sort of lives a fantasy, if you will, for her clientele, so that they can see her living the fantasy that they hope to see themselves living. And she comes to Salem eventually to make a deal with Titan to have them buy her company, but she wants to maintain control and remain at the helm of the company.

Soaps.com: So she has a projection of who she is for the company, but who is she privately? She is a good girl or a bad girl? Or do we not know at this point?

Sarah: I think she’s just a human girl. She’s not a good girl or a bad girl. She has good days and bad days. She’s driven. She’s not going to let anything stand in her way, but she’s a good person.

Soaps.com: We hear Madison and Brady [Eric Martsolf] will be romantically linked. Can you tell us anything about that?

Sarah: She comes in and has her initial meeting with Brady, which gets off on the wrong foot. They don’t see eye to eye straight away, if you will. He does a little something that she thinks is very, very inappropriate and kind of rude and she’s taken aback, but at the same time the minute she lays eyes on him I think she has that little stirring feeling in her gut that makes her all tingly inside. [laughs] It’s fun for her to mess with him for awhile, as she does, and she enjoys that for a bit. And then, you know, it just gets really complicated from there.

Soaps.com: Before coming to Salem, does she have ties to anyone already there?

Sarah: She has a tie to Sami [Alison Sweeney]. She has history with Sami, so when she first meets Sami, she doesn’t realize she actually knows Sami from when they were kids.

Soaps.com: How did they know each other?

Sarah: When we were kids we were in school together. Elementary school.

Soaps.com: How does Madison compare to the other characters you've played in Daytime?

Sarah: She's just really, really different. I haven't had any moments yet where I thought, oh, she's totally similar, or a little bit similar to this character or the other character that I've played. I think she's different in mentality and presence...[our connection was muffled for a bit.]

Soaps.com: In addition to the characters of Brady and Sami, who else have you been working with?

Sarah: Nicole [Arianne Zucker], a little bit. A little action with the ex.

Soaps.com: Of course. How does that go down?

Sarah: It's interesting. Let's put it that way. [laughs] I wouldn't say it's bad or good. For Madison, she sort of walked away from the conversation with Nicole going, 'Okay. Who is this character? And what is it she wants?' I think she's a little suspicious of Nicole when she first meets her and what her intentions are.

Soaps.com: As well she probably should be.

Soaps.com: "Days of our Lives" is going through a lot of changes trying to get back to the core characters and basic storytelling. Do you feel a difference from other shows you've been on?

Sarah: I really do. I feel a big difference. I feel that everyone is very much invested. In one sense, I think that everybody working in Daytime right now is very invested in keeping Daytime on the air. So there's that energy that's coming to the show every day from everyone realizing that the scenes have to be stepped up, that they got to do the extra work to make the scenes pop when you only get one shot at it. You get one shot and we only have this shot to stay on the air so we got to make it great. There can't be any mediocre work going on. It's a fun time. It's an exciting time. It's exciting to try to be a part of something that's trying to reinvent itself.

Soaps.com: Were the changes "DOOL" had planned part of the reason you took the role?

Sarah: Correct. I listened and I listened and I thought 'Yeah, I want to be a part of that. That sounds good. That sounds right. That sounds on the money of what will work.' I believe that what they had in mind for the changes is what needs to be done in order to bring back the audiences. People have changed and if the medium doesn’t change with them then we can't accommodate them anymore. Realizing the same viewers don't want to see the same things today that they did 20 years ago, because we've all changed in the last 20 years and find different things interesting now than we did then, is an important part of that.

Sarah: No, I don't think that's the future. Which is not to say I don't think they will succeed. I just don't think that's the future of Daytime. I believe we can bring the viewers back right to the network. Right to the network television that we're on. Hopefully we'll be the model for it and it will work. I believe it will work. I take that back. I don't hope, I believe. And hopefully more and more soaps will come back or they'll make some new ones that from the get go will have the changes that need to be there.