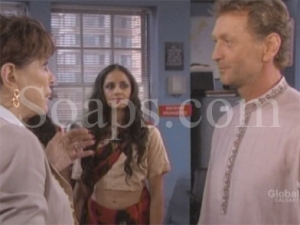 My Vivian departed with Ivan this week which was a bittersweet sendoff and to me, the end of an era once again. Will Corday, Clark Poulter and Thomas Jr. remember that there are a large percentage of us viewers who love drama and camp or will this alternate version of Salem continue to spew sunshine and rainbows for the years to come? Take our DOOL poll.

Great sendoff.
It was utterly impossible to care about the twelfth Hernandai to grace the screen for no apparent reason. Surprisingly, he got a better sendoff than half the cast of “Days” has gotten in past years. I felt for Melanie and found it sweet of Jennifer to tell her own story of heartache over Frankie years ago. I enjoy the history being brought to the show. It’s nice to be reminded of Frankie and also great to see Jack back. More on that next week…

That’s some twelve step program over at Salem Oaks.
The stylist there works wonders. Carly went in a mousy mess and came out a glam puss. She asked Dr. Norman how to make amends with her coworkers at the hospital. Why, I’m not sure. Instead of making amends she should turn herself in to the cops for theft, but her old lover Beauregard would have patted her on the head and said she was a bad girl just like he did when she murdered her husband and send her on her way. Happy trails Carly.

Naturally…
Instead of Abe changing to a job where he could spend more time with his family, Lexi chose to cut back on her hours in order to help further his career. Though I dislike that the little woman jumped at the chance to follow her man around, it’ll be nice to see more of Lexi outside of the hospital. My thoughts are that (spoilerish) Abe’s not going to stand a chance against Elvis as mayor and surprise – I prefer Elvis in office. He’d put the Brady family in their place and bring back the drama in Pleasantville.

Reality TV?
Watching Jennifer prepare Sami for a job interview felt more like reality television than a soap opera. Sami learned how to shake hands and how to dress monochromatically. Here’s hoping she at least paired that distasteful outfit with some jewelry or a colourful scarf. Dare I mention that once again Sami’s keeping secrets from her ex-FBI beau? Some things never change. I’m sure she’ll get the job under Jenn’s fine tutelage and will screw it up soon after.

Master of the sneer.
Is it in Bo’s job description to taunt a prisoner’s family? I’m not sure Vivian would have gotten so out of control if he hadn’t fed into it by taunting her about Quinn. And Hope’s turning more into Bo by the minute. Like dear ole hubby, she tried her hand at the sneer and jumped down Taylor’s throat before getting the facts about whether or not Tay fed Quinn information on the prostitution attacks. They’re partially to blame considering they hired her without a background check. I’d like to see a non-Brady in SPD. McCarthy? Anyone? Rafe doesn’t count. He has turned more or less into a Brady.

Roman allowed Quinn, a known drug lord and pimp, to run free just because they dragged his sorry ass into the cop shop after finding evidence that he was the Salem Stalker? An apology should suffice, but the Brady boys- like to go the extra mile for the scum of Salem, except the DiMera scum. Hysterical!

The "victim" in every sense of the word awakes.
Chloe woke up in record time from being beaten up so badly that Daniel almost tossed his cookies all over her when he saw her. I’m not sure why, considering there were no telltale marks on her skin or even bandages to show she was attacked. Why did Mandy look like she was put through the wringer but Chloe looks completely healthy? Chloe didn’t even defend herself regarding Kate being the reason she became a prostitute in the first place, which floored me. Instead, it was all about Brady giving her a hand out. Sigh. I wanted to see Chloe leave town without a man’s help. And she didn’t deserve reward money considering the coppers found out Gus was their man in the first place! I suppose this time she at least didn’t have to get naked in order to get the cash... I’m glad this is wrapping up because it’s gotten a little too irritating.

Poor Gus.
I’m trying really hard to suspend disbelief on this one. The reason Gus beat down hookers is because his own mum abandoned him on the pier 25 years ago? (There’s no way he’s only 25.) Who is his mother? Is she a Horton or a Brady? This storyline wrapped up in record time which meant that I still see Gus as a gentle man who loved cooking up the schemes with his madame. I found Vivian’s reaction to what he did to be a tad out of character considering she has done worse than him on several occasions. Quinn had every right to go off on Gus, after learning he was the one who set him up but I loved Gus’s departing jab at him, reminding him he’s a drug dealer and a pimp. How does Quinn know that the drugs he sold didn’t end up in a child’s hands or end somebody’s life?

To find out why Matt said, "It was as moving as a "Saved By The Bell" Thanksgiving special," please take a peek at SOF's Matt's DOOL Musings, which are hysterically funny, and we’d love you to join us on Twitter @soapoperafan, and Facebook. Come tweet and Facebook with us about "Days of our Lives," all the other soap operas, "Glee," "Grey’s Anatomy" and "Vampire Diaries!"

Have a great weekend. I’m off to wander the shores of Lake Ontario.