The current Philip Kiriakis was having his photo taken with fans, so I waited until he was done and asked for a photo. He stopped someone and asked them to take the picture of us.

I walked back over to the corner and caught my friend, Charlene, flirting with Dr. Jonas. I told him that I liked Summerland. He said that he liked it, too.

Shortly after, James Reynolds shouted out for everyone to get together for a group photo.

After this photo, James called out for all of us to join them in the group, so we did and on the way out after the game we were handed the 8 1/2 x 11 photo to place in the matte we were given in our VIP bags.

We were all then led next door to the court. On the way over I was able to thank James Reynolds for the tickets. He smiled and told me to enjoy the game. Fans were already seated on one side of the court once we got over there. Our group was led to the other side to sit behind the players.

Kyle Lowder (Brady Black) did a great job singing the Star Spangled Banner. I was hoping Nadia Bjorlin (Chloe) would blend in and finish it, who, by the way, is even more beautiful in person if you can even imagine that.

The game began. Bryan Dattilo was the coach for the orange team and James Reynolds coached the black team. They were joined by other [really good] players to complete the teams. Arianne Zucker (Nicole) was the only girl from Days that I noticed out on the court.

Belle arrived and was sitting with the previous Shawn on the bench while the other Shawn and both Philips were on the court. I couldn't resist yelling, "Belle! You need to make up your mind!" I spoke with her later. I had met her before, a couple years ago, walking down the street. That time I had my camera with me and asked if she minded if I took a picture of her. She said, "Sure... but like this... ." Then she grabbed my camera, turned it around, and put her arm around me and took a couple pictures of us together. She's so cute and nice in person.

Shelley Hennig was signing autographs and I wanted to meet her so I stepped down and she signed the script that was in the VIP bag. She said she didn't like her photo taken alone so I had to be in the picture with her. She's so beautiful in person, such a nice smile.

Throughout the game, James Reynolds was reading off raffle tickets for prizes. I didn't win but since I had won the chance to come to this event, it really didn't matter to me.

The game was in a tie so it went into overtime. In the very last second of the game, the orange team scored a shot and won the game.

This was an amazing experience. I wish to thank Christine and Lori from Soaps.com for making this happen for me and especially James for the tickets. It was so much fun and over in a flash.

To view my entire set of photos for that event, please Click Here! 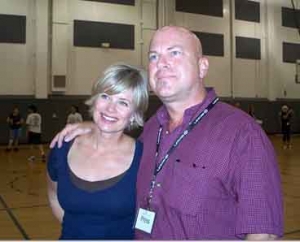 I wasn’t sure what to expect when I received an e-mail saying that I won the SOAPS.com James Reynolds Basketball Game Trivia Contest! I won four tickets and the opportunity to take photos of the event.

When I arrived, my three friends were already there, waiting. I told the girl at the counter hat I had won the contest. She handed me a Press lanyard and led me past the basketball court through the doors to another court where the players were warming up. I immediately started seeing members of my TV family. I started watching Days of Our Lives 35 years ago. I have a long running connection to the show. So many of the characters on the show have been in my home, on my TV, more than my real family members (and some of them I like a lot more! lol) Winning the tickets to the game meant a lot to me.

Once inside the second court, I was introduced to Lori from Soaps.com. Right away, Lori was able to grab Darin Brooks for an interview. I said nothing. LOL. I just stood there thinking… I can’t believe I’m here and that is Max in front of me and Lucas is playing basketball over there with Brady, Dr. Jonas, Philip, and Shawn and Kayla is in the corner talking with Chloe! I was beside myself. And then the girl from the front came up to me and said she’d go get my friends. I thanked her and she left to find them and all I could think of was that she didn’t know what they looked like! So I ran out and found them and came back. When Lori was through with Darin Brooks I asked if he would mind if I took a picture of him. He said that it was fine but he wanted me to be in the picture, too.

Right away, I knew that any of the cast members that I spoke with would be really nice. I’ve met some of the Days cast before and they’ve always been polite, welcoming, and willing to share a moment with you. They give the impression that they’re a big family. That makes me think that it must be really difficult when someone leaves the show. I’m guessing that most of those tears we see in the good-bye scenes are not fake!

I noticed my friends were down at the other end of the court so I headed there to see Kayla and Chloe. I told Mary Beth (Kayla) that I love the cast now but I’ve been watching the show a long time and she is the one that I wanted to meet the most that night. I think she took it wrong but she was really sweet and, again, insisted that I be in the picture with her. They must put aging makeup on her in the show because she looks so much younger in person. (There, that should make up for what I said to her!) Nadia was kind enough to take the picture of us.

After that, I just wandered around the court a bit, stopping to take a breath, and just watching the players and the cast interacting with press and fans. I ran into Chelsea. She was alone and signing the shirts for the raffle. She smiled and posed for me. 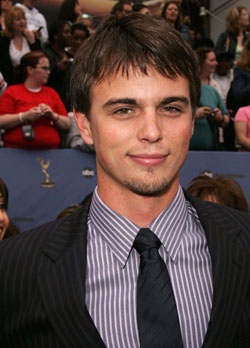 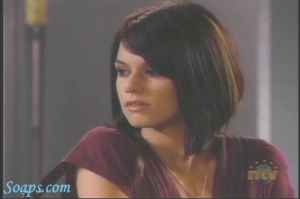