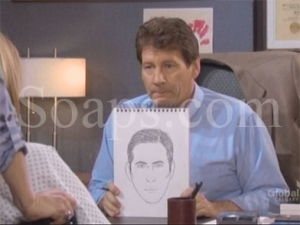 The scene tries too hard. (Soaps.com)

Though I’m still quite bored with the rewrites, I’m fairly sure the writers have done the best they could with the shambles Higley left Salem in. They appear to be reestablishing the love the couples feel for one another, and considering we saw a definite lack of romance in the past, I guess I can stomach the over-abundance of adoration.

Quaylor? Tinn?
Quinn and Taylor are still piquing my interest with their history, their arguments, and that kiss… I can’t get on anyone’s case about how different Taylor is now as opposed to how saccharine she was in the past because Corday warned us he was taking her in another direction. I just wish she was like this in the beginning.

Salem U website?
I’m not really sure where this campus website storyline is going but it reminds me of “The Social Network.” I’m excited about their excitement but I keep wondering if Tad’s going to hack into it at some point and mess with it considering his bellyaching over Sonny’s sexual orientation hasn’t gotten him anywhere.

Two sides of the same coin.
Sami had another one of her temper tantrums this week. I thought she was going to hold her breath until she turned blue. She has regressed so far back in her life that she tried to find out her test results by committing a federal crime. Her reasoning baffled me. “I couldn’t stand knowing that some lab tech knows my results before me.” Unlike everyone else in the world, who finds out their test results before a lab technician is able to process them? Rafe’s turning into a Brady more and more so he thought the whole criminal act was funny. It sort of was but he’s missing that integrity he had when he first came to the show. I wonder if EJ became mayor if he’d try to get the Brady’s, including Rafe Hernandez-Brady ousted from SPD.

He reminds me more of Bo lately. He did almost everything right when he took Sami to dinner, but looking at his teeth in the knife almost gave me a heart attack!

Just a good ole morn…
Bo and Hope have done more detective work on this prostitute case than I can remember for years. Maybe ever. They must be brushing up on technique by watching reruns of "CSI: Salem."

One of our regular posters, Holdingonfordearlife says, "We have Roscoe Soultrain and Boss Hogg in the SPD!!"

It’s finally out that Gus is the Salem Stalker. I’ve known about it for weeks and wish they didn’t let it leak to us so soon. I’d rather honestly not have known until I saw the episode. Otherwise, it comes off as rather anticlimactic. The sketch looked barely anything like Gus, but I have a feeling Roscoe and Boss Hogg will find the culprit soon. My poor Gus. All he wanted was a little love from Vivi and they turned him into a stalker. You could sort of see something was off when we saw the shrine to his madam in his hotel room. Vote in my poll: Did you know Gus was the Salem Stalker?

"Cool. Supercool."
Daniel’s sudden insecurity about Jack is furthering the future triangle storyline along. I’m not sure if his concerns are warranted or not. Jack and Jenn do have a long history, but she does love Daniel, who hasn’t hurt her at all yet. In order to save face, part of me is hoping Jack’s "walkabout" is explained to be a kidnapping, but I suppose it would cause more drama if it wasn’t.

Salem Oaks Rehab:
I dig Dr. Norman and would like to see her stick around Salem. I’d like to say I care that Melanie and her brother nu-Nicholas are getting along, but I don’t know him and have no feelings at all for him. Is he staying?