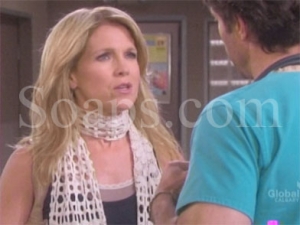 Let’s just get right to it this week since I’ve a lot to drone on about. Maybe I’ll get lucky and you’ll leave me a comment with your own thoughts after.

She suddenly forgives quickly?
Gus is really hurting after being rebuffed once again by his Duchess. I didn’t really understand Vivian’s motivation for forgiving Quinn for saving her mortal enemy, which happened at warp speed. They must be wrapping up Vivi’s story before she takes off near the end of this month.

Keep it secret or share it?
I loathe the fact that once again we’re seeing a Sami Brady storyline front and center with repetitive dialogue and all. There are other characters on “Days of our Lives” and I truly hope that after September 26, we see more of everyone else and less of Sami. Seriously this has gone on for the past three years or more and it’s freaking tiring. This is not “Days Of Sami Brady.”

I am torn on how I feel about Sami keeping this a secret from family. On one hand, why not spare them the uncertainty if it’s nothing? On the other hand, family is supposed to be there for you through thick and thin. If you can’t lean on them, there’s a problem. Not that I think the children should have known, but good and bad, it’s all part of life. University Hospital must be progressive. They allow nail polish to be kept on during surgery.

Another soap.
Watching Carly and Nicholas in rehab with Dr. Norman feels like we’re watching another show. Dr. Norman’s new and because we don’t know nu-Nicholas anymore, it’s tough to care about his feelings. I’m curious about where he’s staying and why he hasn’t seen Vivian yet. At Salem Oaks, time seems to go by slower than the rest of Salem.

Tad the cad.
Many are wondering if Tad has some latent homosexual issues because he’s so against homosexuality. Perhaps that or he was simply brought up to be a bigot. Not only are his gang of friends against his bigotry but they’re friends with “the enemy,” which means Sonny’s really in for it. I’m worried about what’s to come. Wait until he finds out Will’s gay.

Even though it was interspersed with the rantings of Tad the Cad – yes I stole that from “All My Children,” it felt good to see a summer scene especially since ours is coming to a close. I even enjoyed Daniel and Jenn’s banter. We’ve learned that they absolutely adore champagne, and that Daniel loves the colour of his scrubs. What was wardrobe thinking putting him in that blue t-shirt? At least it showed off his buff body.

I love how Daniel basically told Jennifer to stay the hell out of Maggie and Victor’s relationship and let it go. Even better that she respects him enough to take them into consideration. They seem more mature in rewrites. The problem is, the wardrobe team struck again. That hideous scarf she wore at Victor’s manse should be banned from the studio.

The prostitution story.
Hope and Bo played detective with the attacks on prostitutes, along with Roman’s help, I guess because Abe forced the issue. Not that I wanted to see Chloe being attacked, but I wonder why it was alright to have us watch Brady beat the tar out of EJ and it’s not alright for us to see the attacks on Mandy and Chloe? Perhaps it’s the rewrites or maybe some concern came up that they’d get backlash from the media for showing female battery. I didn’t really feel for Chloe after the attack. I could have used more guttural groaning, and her dress, hair and face could have been streaked with more blood and dirt. Can you tell my husband works in the visual effects industry? I'm picky.

Countess Wilhelmina Cosmetics.
Suddenly, Kate, who already owns Hearth and Home, wants to restart Countess Wilhelmina Cosmetics. I like the idea, but have questions. Why doesn’t Kate have her own money to get things started? Why did Stefano refuse to hand over the dough? Why does Victor want to see it fail? Because it's a Titan company and he doesn't want Kate making money off it? Why is EJ keeping tabs on what Kate’s spending? When do we get to see Stefano again? Vote in my poll: Why does Victor want Kate to fail?

Quinn and Taylor.
Watching and listening to them discuss their history has actually made me see and feel that they have known each other for a very long time. It's very believable. Though I don't see chemistry, I feel a closeness between them that's sort of uncanny. Now the question we’ve all been wondering – is Quinn good or bad? It seems that in the past he was an opportunist looking to prey on vulnerabilities of women in order to make himself a few bucks, but since day one he has seemed to struggle with himself. He'll be leaving the show briefly only to return a month later. We'll be seeing some changes to him at that point and will at last know the truth.

Here’s a taste of SOF's Matt's DOOL Musings "…Quinn decided to class up the enterprise by calling them 'dumpster divas', which was a mild improvement on the rival pimp's stable of 'hotel hos'."