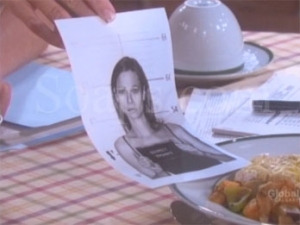 Everyone in blue. (Soaps.com)

Lately, if you ask me what happened during an episode right after I’ve watched and recapped, I really couldn’t tell you. It’s been that boring. The show at this point is sans Higley. There are some noticeable changes that are pretty neat. We now hear different background music. No more Dr. Who, which is nice though I like the Dr. Who stuff. We hear car horns honking, and people talking in the background in clubs. This is only a taste of what’s in store, we’re told. Monday’s show was like one of those made for TV Hallmark movies that I avoid at all costs. It was so touching I almost threw up while the two families stood over Maggie of all people (I mean why not Chad? He was shot, too!) and promised they wouldn’t break the peace. If this is how corny the show is going to be I’ll be severely disappointed. I’m trying to give them the benefit of the doubt simply because these are rewrites and I’m hoping they’re simply establishing the future for “Days 2.0” or clean up Higley and Corday’s mess.

I don’t mind romance in moderation.
When romance is between couples such as Safe, Dannifer and Bope, I only want to throw up. The scenes are altogether too long, which doesn’t help. That Bope bedroom scene dragged, Dannifer spent way too much time at make-out point drinking champers – not once but twice, which I guess establishes that they’re now a serious couple, and though they’re not a couple, once again I ask how many times we have to see Nicole and Taylor argue about EJ? I prefer creative writing in the scripts with snappy fun one-liners. Did they fire all of the funny script writers?

“Give me my ‘bitches’.”
My Nic Nic called my Mel a ‘little bitch’ simply because she’s jealous and concerned about Brady’s feelings for his best friend. It’s ridiculous and makes me not want a Bricole reunion. Brady’s right. They do enable each other. Besides, I can see already that we’re going to get an Ejole pairing once again. I like them together so that’s fine with me, only if my Nic Nic is stronger this time and not under EJ’s thumb. I want them both seen as strong characters again. I’d also like to see my Mel in a better storyline truly being a little bitch! No more Kinsey or Vivi soon means we’re sorely lacking in the bitch department. No bitches in soaps is unheard of. I mean soon we’ll have perfect Marlena and Carrie the drip back and then who will make the show interesting? Kate can’t do it alone.

Anticlimactic.
Quinn and Taylor’s secret was sort of anticlimactic. They met in University, were arrested for demonstrations…were probably lovers. Who cares? The important thing is that the SPD messed up again by hiring somebody without doing a background check! I love it.

Chloe’s glam wardrobe.
Dylan D., a poster on the “DOOL” forums says, “Thursday Hope made a comment about how Chloe looked really dressed to just be going to a “music lesson.” Chloe puts on a dress and heels when she’s only going for a walk, so it makes you wonder if Hope’s been living under a rock because every time Chloe’s on she’s wearing a dress and high heels.” Dylan’s right. The show was trying to show off Hope’s detective skills but it was a laugh. I’ve only seen Chloe in jeans once. I’d have preferred to see her in jeans more often, especially since she has no money and couldn’t possibly afford the dry cleaning bill for all the frocks. With Chloe leaving, the wardrobe team can spend more on clothes for the rest of the cast. I’m looking forward, but if they’re reading this, which I doubt, blue and purple are nice but there are other colours in the colour spectrum.

Cysts?
Sami and Rafe moped around all week after learning she’s not pregnant with yet another kid to pawn off on Grandma Caroline but she has cysts. Her symptoms were that she was feeling a little queasy after eating her own shotty cooking. She had no bleeding and no pain. So what sort of cysts are these? Most of us women have had cysts. Most are harmless and benign, so I’m finding it hard to feel for Sami who I know doesn’t have cancer. And the way Lexi built up "the procedure" discussing all the risks was hysterical.

Do you want a "Safe" baby? Vote in our pregnancy poll.

Evil EJ is back.
Kate caressing EJ’s face and saying, "Welcome back my love," was rather disturbing and oddly felt sexual – at least to me. I’m glad he’s evil again and that his strength is back but where is Stefano? Is the actor off on holiday?

Rehab.
I’m still a little confused about de-SORAS’d Nicholas. Suddenly he has forgiven his mother or is he just feeling guilty but once she’s better he’ll be holding on to his anger?

Evil women must pay...
Because I know who the stalker is, I’m not sure at this point I can say much without giving it away for others. One thing I will touch on is how absolutely dim it is of Quinn to have photos of his ladies of the night in his tablet and that nothing's encrypted. And how is he going to protect Chloe by keeping her as one of his stable of girls? Chloe's in big trouble.

Here’s a taste of SOF's Matt's DOOL Musings. "If he hadn't been gay, the prospect of his mother breeding another sprog would have been enough to put him off."

This week Soaps.com interviewed two of Salem's actresses. Here's our Suzanne Rogers (Maggie) interview and an interview with Molly Burnett (Melanie). Click the links to read.