Soaps.com Chats With Days of our Lives’ Suzanne Rogers 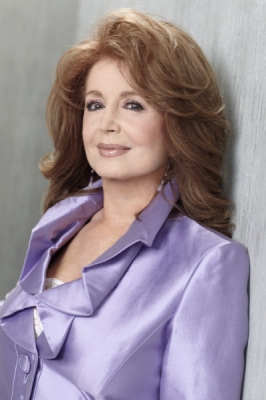 Soaps.com recently sat down to chat with “Days of Our Lives” veteran Suzanne Rogers, who plays the show’s lovable matriarch, Maggie Horton. Read as Suzanne shares details about her personal health battles, discusses Maggie’s feelings for Victor, debates whether the two can last as a couple, and much more!

Soaps.com: You were once a dancer at Radio City Music Hall in New York. When and why did you quit dancing to go into acting?

Suzanne: Well, you realize that you can’t be kicking those legs forever! [chuckles] I was 17 when I went to Radio City, and the next person to me was 24. I just saw how difficult it was for the older girls in the line, and I thought that this wasn’t something I wanted to do in my thirties. So I auditioned for musicals and I got them. When I was doing “Funny Girl” on the road, one of the guys told me I needed to study acting, get rid of my southern accent, and that I needed to change my last name. When I got back to New York, that’s kind of what I did.

Soaps.com: In the 1980s, you were diagnosed with a rare disorder called Myasthenia Gravis. Tell us a bit about this illness.

Suzanne: It’s a neuromuscular illness that comes from stress. There are a lot of neuromuscular illnesses like Parkinson’s, Lupus and MS, that come from stress. Mine is the lesser of all of them. There is no cure, but I’ve been in remission since 1995. It affected me from my neck up, including my eyes and my mouth and my voice. It really is a hellacious kind of thing as far as trying to get it into remission. You have to go on drugs like Prednisone. Your face blows up and you get a spare tire around your middle. That’s what I had to deal with when I was on the medication from ’84 to ’95. It was tricky but I realized how strong I was. The doctors had said I would never be in front of a camera again.

Soaps.com: How did it come to be included as a storyline for Maggie on “Days of Our Lives?”

Suzanne: When I first came back, I was still on Prednisone. My face was much fuller and I looked so different. The audience thought there was something else wrong, like I had been drinking. I think it was preservation. The show wanted to include the audience so they would know what was really going on. It was a risk. My mother was afraid that it would bring the onset of the disorder again, but it didn’t. It was actually very cathartic. I think it all worked out the way it was supposed to for Maggie.

Soaps.com: Speaking of Maggie, let’s discuss what’s going on in her life right now. For months following Mickey’s [Horton, John Clarke] death, she’s been fighting romantic feelings for Victor [Kiriakis, John Aniston]. How much of a stretch is it for Maggie to feel love for a man like Victor, considering his countless shady dealings in Salem?

Suzanne: First of all, Maggie doesn't need Victor. And Victor, in the beginning, didn't feel like he needed her, either. He was kind of intrigued by her, I would say. Her moral standards were not his, so he'd push her away, but then pull her back. I think Victor didn't want to show his other side. Everyone has two sides, you know. You choose to be a good person or you choose the dark side. He had chosen the dark side, and his other wives had done the same. Maggie is not that at all. She could take it or leave it with him.

Soaps.com: What exactly was Maggie going through when moving away from Mickey toward Victor?

Suzanne: In retrospect, Maggie had always been in the background of Mickey's world. When he passed away, she had to step up and take care of herself and her loved ones. All of a sudden, there was a strength there that she didn't know she had.

Soaps.com: How much has Maggie changed that she can be involved with a man like Victor, and do you believe Victor has changed as a direct result of Maggie?

Suzanne: Maggie is not going to let another man come into her life and put her down or put her in her place. It's like a tennis match between Maggie and Victor, now. It's been an interesting volley. With Victor, he's never really gone down this road before. All of a sudden, here's this woman, this red-head, and he's going, "Hmm. I don't know if I like this or not, but I'm intrigued by it." That's what's so interesting to the audience, to see that there's another side to Victor.

Soaps.com: Be honest - do you see Maggie and Victor lasting?

Suzanne: It's interesting. It's like when you see a wonderful sundae sitting on the counter, and think to yourself, "I'd like to try that." But then someone else puts another one next to you and you go, "Hmm." I think Maggie thinks that she's good for Victor, and that he's shown her little changes in his personality that she can live with. I think a part of her is interested in that. In turn, I think Victor is not all uncomfortable with her.

Soaps.com: Aside from her love life with Victor, what else is in store for Maggie?

Suzanne: I really don't know. I hope that the new writers find Maggie as interesting as they have in the past. I love working with all the kids that moved into her house. It was lovely working with so many people whom I had never really worked with before. I hope this sort of thing continues because that's what makes our characters well-rounded.

Check out what another Salem star had to say through Soaps.com Chats With Days of our Lives' Molly Burnett..