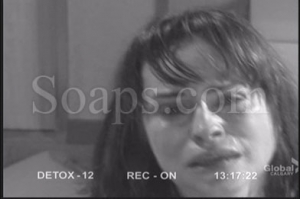 The week was full of romance. Daniel romanced Jenn at the park, Sami seduced Rafe, and Abby enjoyed time with shirtless Chad. We also saw a lot of physical abuse with Vivian cuffing Quinn and Carly next in line, and Kinsey whacking Tad across the head. I found this week that I’m questioning a lot more, rather than commenting. Maybe you’ve questions as well.

Clam chowder is safer.
Though I don’t want the show to become too mobsteresque, I can’t help but admit how well the scenes were done in Chad’s shooting and consequential scenes after. Dimitri sure is handsome, but the man needs prescription glasses.

I like how fast Vivian found out Quinn was secretly helping Carly. It’s nice it wasn’t dragged on. The big ‘what the…’ was Carly accepting pills from Vivian. Obviously she was not in her right mind. Those pills could have killed her. Since they didn’t, Vivian mustn’t be in her right mind, either!

I’m not certain if Chad actually disowned Stefano and his family or if he simply left the mansion for his own safety. Salemites like throwing the word ‘disown’ around too much. It’s understandable that he’d do what’s best for him. He should take care of himself. After all, he could have been shot by a mobster who actually knew the human anatomy, and then fans would have no shirtless scenes. Still, I don’t want him to disown them and I’m not sure leaving the mansion will keep him out of harm’s way. At least there he had that crappy security system and guards that can’t shoot…wait. I’ve changed my mind. Perhaps Caroline’s clam chowder is safer.

Speaking of hmm… "Tim," a long-time viewer of "DOOL" remembered something I’d forgotten to make note of. "Hmm during Maggie's operation a person cut themselves and had to leave the operation with all the blood showing. This might be an indication for later on Maggie becoming HIV positive or another blood disease." Yikes.

Stefano asked Victor for peace and he refused, but since Maggie asked him to make peace, will he?

Enough already.
Really tired of EJ and Taylor’s incessant repetitive arguing. They need to stay away from each other permanently. Also maddening is Taylor and Nic Nic’s consistent fighting about who hurt whom. Could Taylor have more in common with her sister than we originally suspected? Was she in the adult film industry in some capacity?

Who is the prostitute stalker?
Do you have any ideas? I’ve been wondering why Roman won’t allow Bope to work the prostitution case. Is it really just because they’re so busy and needed elsewhere or is he hiding something? Is there a cop in on it that he suspects? Is DA Woodsy the culprit? Is it Roman himself? Vote on who you think the prostitute attacker is. As for Bope working on it secretly, don’t they realize losing their jobs means no food or shelter for Ciara? Do they even remember who Ciara is these days or is she schlepped off to Doug and Julie’s place until she turns 20?

Agent suspicious...
Whoever is writing Sami’s scripts needs to can it with the agent jokes. It’s been two years. It’s bad enough she’s spouting old lines from two years ago but now she thinks she’s pregnant. I almost passed out the first time I saw this in the spoilers. Instead, it’s something more sinister. For her, I mean.

Prostitute.
Kinsey learned her lesson the hard way that prostitution is a rough trade. Chloe has learned more than that first hand, though it’s all been off screen. I don’t have much to say about this storyline except that I actually like it.

Melanie?
What’s going on with my Mel? She has no storyline, and since Dario’s leaving, I’m left wondering what comes next for her.

Kudos.
Carly (Crystal Chappell) was incredible in her rehab scenes. I'm not even sure she really knows the nu-Nicholas (de-SORAS'd) is there. How close was he? Matt commented on Nicholas as well. Here’s a taste of SOF's Matt's DOOL Musings. "Carly barely recognized him, and it wasn't just the drugs she was on. He seemed to be on some magical anti-aging drugs, or maybe it was just the effect of being out of Salem, or it could be from the spell Kate cast on him when they were..."