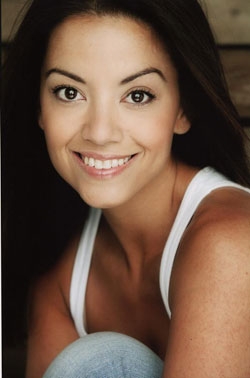 Salem’s newest resident, Dr. Amber Kress, may have just come on the scene, but she made quite an entrance when she interrupted Chelsea and Daniel’s steamy kiss. We don’t exactly know what her agenda is just yet, but we do know she’s already made quite an impression.

While she’s new to Days, Dr. Kress’s portrayer, Erika Page White is no stranger to soaps. She appeared on The Bold and the Beautiful for a short time and played Tea’s niece, Roseanne Delgado for several years on One Life to Live, which earned her the 2000 American Latino Media Arts (ALMA) Award for Outstanding Actress in a Daytime Soap Opera. In addition to her soap roles, White has appeared in the primetime series, “Second Noah”, “Special Unit II” and “Resurrection Boulevard”, as well as the movie “Little Bigfoot.”

Adopted as an infant, Erika was raised in Dallas and developed a passion for dancing, sports and of course acting. After modeling and acting in high school, she received a theater scholarship for a year at the college of her choice. A strong supporter of adoption, Erika has made several speaking appearances and would like to one day produce a movie on the subject.

On a personal note, Erika lives in Nashville with her husband, country music artist Bryan White and their two children.

As she’s currently a recurring character, we don’t know when or where she’ll turn up next, but we certainly hope to see her shake things up in Salem again soon!

Days of our Lives Wardrobe Answers!

An Update on Days of our Lives’...