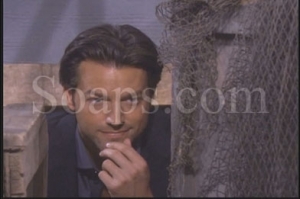 It was a very drama filled week. I missed the light-heartedness and the one-line zingers. Though I enjoyed the week and think we’ve seen a major turnaround with the writing, I still have a few bones to pick.

Addiction storyline.
Quinn cares about Carly because he sees parallels between his life and Carly’s. I still don’t care. This story needs help. Help right off my screen, that is. I couldn’t care less about what happens to the victim Carly Manning and seeing big bad Quinn cry is sort of ridiculous. The sooner they wrap this storyline up and Carly goes to rehab the better.

Odd directing.
Maggie’s shooting was almost anticlimactic. I almost wish there were no spoilers in soaps so that we could continuously be surprised. It’d keep us glued to the television. How strange that nobody called Chloe or Will. The fact that Maggie told Victor it wasn’t his fault was true. It was her own fault for not minding her own business and instead trying to protect him. I thought it showed great strides in their relationship and the timing was perfect, because I was getting almost bored with their story. This should step things up but she should take advice on how to be a mobster’s wife from Kate.

Is it too late for Chad to run?
Though EJ’s trying to get his brother to run from their dysfunctional family, I believe Chad’s already embroiled so deep that he can’t get out. He loves “Father” and because of the DA treating him like dirt his whole life, it’s not likely we’ll see Chad turn his back on somebody who treats him with love. Then again, I don’t write this stuff.

Reunion?
It looks as though we could be in for a Bricole reunion. I’m fine with that. I’m a little tired of Brady’s superhero syndrome, so I’m ready to see a little more tenderness now and again from him.

“If only you were a bricklayer than a gangster.”
I’m not a fan of this vendetta storyline. They keep discussing a war, when there are only four players. It’s really ridiculous and in fact, if it were really a war, there would be even less players. Unless you’re really going to off a few characters, lose the “vendetta” storylines or at least don’t make them front and center. I repeat myself from a few weeks ago, this is not “General Hospital.” If they wanted to watch “GH” they would. That reminds me. Who the hell is Dimitri? What happened to Nico (Lorenzo Caccialanza) and why can’t Dimitri tell one DiMera brother over another? Vote on whether or not you like mob stories on “DOOL.”

Awkward.
When you’re dating your step-aunt, what can you expect from your step-father – her brother - but the protection vibe? I get Rafe’s less than thrilled reaction to Will’s condom popping out to say hello but at least he’s being proactive. The bigger problem is the fact that he’s keeping it in his wallet and it’s probably been in there for eons! Never do that. The friction and your body heat will weaken the condom and allow for leakage. We can’t expect Samanther to have taught him this since she has no idea of what the words ‘birth control’ mean.

Gabi thinks middle-aged folks (like Chloe and Kinsey) only go to hotels for sex. Beats the backseat of a car or having Scaroline interrupt. Though I don’t care much about either character due to the terrible writing we’ve seen, I did think the sex scene was very sensitively done. Will was sweet to her needs. Still, I don’t really get why they took things to the next level other than peer pressure. They have zero chemistry beyond friendship.

Bope.
Once these two fools were one of my favourite couples to root for. Now I’m almost rooting for them to leave Salem. I’m not sure it’s possible to write for them the way they were once written in order to get this ex-fan interested again. Bo’s a smug and rotten cop and Hope’s become a bitter hag. Both refuse to follow orders and frankly, I hope Roman does can both their arses.

Patty, a poster from our sister site SoapOperaFan weighs in. "I hope if they are going to focus most on Bo & Hope they let those characters grow up a little and come up with new stories for them. Bo is always sulking, Hope is always whining about their past mistakes and they are always breaking up and getting back together. It’s Boring!"

Funny that Roman said Rafe didn't have a conflict of interest in the shooting case yet Bope does. Hmm how quickly we forget that a few days ago Stefano locked Rafe up and cloned him. Bo’s right. There isn’t anybody in Salem who likes the DiMera’s on the force. As Matt pointed out, they should have gotten Detective McCarthy to work the case. She’s the only cop on the force who actually works and has no conflict of interest.

Random thoughts: I'm still in shock that Samanther would want more kids when she can't even take care of the ones she has now.

How funny was EJ's drunken dance? While we were recapping, Matt says to me, "If he and Brady drank together, they wouldn't have these problems." See a pic on Matt's Twitter page.

Be sure to read SOF's Matt's DOOL Musings.