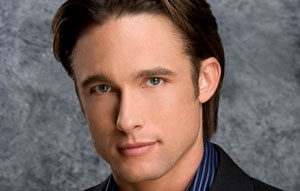 After hearing what a great time Days castmates Nadia Bjorlin (Chloe) and Brandon Beemer (ex-Shawn) had last year, Jay Johnson (Philip) reached out to the people organizing the 2009 Soap Cruise and offered up his soap star services. I recently had the opportunity to talk with Jay and got the scoop on the upcoming cruise, as well as Philip’s recent transformation.

As for what Nadia and Brandon said to make Jay want to go on a cruise with hundreds of soap fans, Jay remarked, “Christian [LeBlanc] (Michael, The Young and the Restless) was the main story. They were just laughing about how funny he was on stage.” He went on to say, “I’m really just looking forward to just getting out, getting some sun. It’s going to be a good time.”

With Nadia and Brandon attending next year’s cruise as well, Jay will already have a couple of friends aboard, but he also mentioned that he’s familiar with Winsor Harmon (Thorne, The Bold and the Beautiful) and Christian who he met at previous events, as well as Jacob Young (JR, All My Children) and Greg Vaughn (Lucky, General Hospital), who will be also be setting sail in January.

Since this will be Jay’s first cruise ever, he’s a little concerned about being cooped up on a ship for four days, but mused, “I think we got a pretty good turn out coming, so I’m really excited to see the fans. It’s going to be interesting. It’ll be relaxing and it’s going to be a lot of fun. Hopefully I come back in one piece!”

When it comes to his fans, who we have no doubt will be attending the cruise, Jay boasted, “I have great fans and I know we’re all going to be able to have a good time.” Like most soap fans, Days viewers have definite opinions when it comes to their favorite show, as well as the character of Philip Kiriakis. “Some fans don’t really like my character too much. Others, they’re glad to see me back on the show. I think everybody is happy with the direction of the show right now for the most part. I rarely come out of my cave though. I feel like I’m at work and at home all the time. If I’m at home I’m studying [my lines],” he laughed.

With his new powerful position in the family business and all the attention he’s been receiving from the ladies of Salem, Philip seems to have been given a new lease on life. Which is something Jay is happy about, as he joked, “I think now I’m having a good time because for the five years previously I was on the show I was always chasing after somebody, so it’s kind of nice to have people come after me!”

Jay is also enjoying interacting with more of the cast, saying, “I was having a great time working with Brandon and Martha [Madison] (ex-Belle), but it seems like across the board, every actor is getting to work with many different actors so in that sense it’s good and I’m really enjoying the story too. They’re doing a good job putting all those people together and telling a story.”

Apparently that trend will continue as he teased that his character is involved in a plot that includes at least ten other actors on the show. Unfortunately he couldn’t give out any of the specifics, but indicated that it’s going to be pretty big! He did however share that by Victor handing the reigns over to Philip, “I think you’ll see his true colors. I think he enjoys the challenge and you know, it is a soap, things are bound to go wrong.”

Which is what we soap fans count on! Soaps.com would like to thank Jay for taking the time to talk with us and can’t wait to see him on the cruise.

Days of Our Lives Christie Clark...