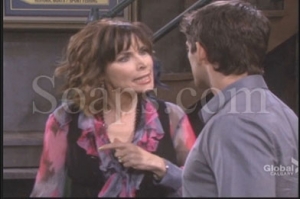 It was a week of bad wardrobe decisions, and sex and war was on everyone’s mind. Interesting combo. There’s more, so let’s start gossiping.

Who are you anyway?
Quinn continues to remain an enigma. Being uncertain of who he is has been intriguing. When Vivian finds out he has Carly at his place, she’ll implode. I’m curious about why on earth he cares about Carly, considering he basically helped put her there, being that he’s Salem’s drug lord. I didn’t know drug lords cared about the druggies they make money from. He seems torn between his nice-guy demeanor and his work persona. I hope we learn more about him and his ties to Taylor. Though he used Parker to get Chloe under his thumb, he also seems to care about Chloe getting her son back. Puzzling.

Why do women always try to change their man?
Taylor has more faith in EJ than he does in himself. Certainly more than any other woman in Salem ever has. It’s too bad for him that he screwed this up, but he’s not the man she fell in love with anyway. He’s no good. He’s a DiMera and Mother Theresa herself couldn’t have changed that. He’ll realize this sooner or later and so will Taylor…

EJ heals fast. Shoot him, or beat him, he’ll only be down a mere day or two before he’s on the mend and out of the hospital. EJ gave Brady back his gun on Tuesday’s show and that 30 second spot which I found really exciting, at the door to the Kiriakis manse, didn’t make it into the next day’s scenes. Instead, the boys got together in the park just to shake hands. It took something away from the drama.

Love me some Kinsey.
Kinsey’s scenes were the highlight of the week for me. From the kiss she planted on Tad to learning that she’s actually a good friend. It’s a shame she’s leaving the show. She’s such an unusual character. She could have provided more fun in the hum-drum town of Salem. I realize she’s unpopular with many viewers, which I find surprising. Then again, I’ve never been a fan of the Carrie Brady types of the soap world. Vote in my poll with your own thoughts on DOOL’s Kinsey.

Too much time on her hands.
Kate must have taken a leave of absence from Hearth and Home, because she has all of this time on her hands to make other people’s lives miserable once again. Really, since she’s happy with Stefano, it’s a little far-fetched to me at times to think she cares so much about what everyone else is up to including Chad and Abby. Sure, I get that she hates Chloe and would do anything to make her life miserable, but even so, where does she find the time? And why does she think a prostitute can’t be a good mother? After all, she was one! How soon we forget…

No nookie.
Will tried to have straight sex with Gabi after Sonny explained that the girl is hot but he was saved from getting intimate by Grandma Caroline. Poor Gabi. She can’t even get a half a day off from the pub to get some nookie without being on call to schlep chowder.

Fast forward the story and fast forward the scenes.
Jennifer told Daniel she loves him and has for a long time. How long is a long time in Jenn’s world? She has only known him a mere few weeks. We’re also supposed to believe he loves her too. I guess this means Jack will be in Salem soon for the predictable love triangle to begin. I’m not sure how it would work considering they’re dealing with a 20+ year relationship versus a 20 day relationship.

Back to the monotony.
It’s as boring as watching me pick lint from my navel, watching the scene unfold between Rafe and Sami fixing a toy train, watching television while guzzling beer and pigging out on popcorn. Why on earth are these two written this way? Nobody on earth is interested in seeing this.

The "V" word rears its ugly head.
Yeah that's the one. Vendetta. We're back on that and this time Stefano's henchman Marco shot innocent Maggie. Maybe he saw the terrible outfit wardrobe had her in and wanted to make it go away. I don't know, but will this mean Maggie and Victor are no longer together? Will Stefano go to jail? Marco?

I’ll leave you with something to ponder…How do Chad and Sonny know one another? And how was it that Brady passed out after Taylor hit him on the back with that vase? It didn’t come anywhere close to his head!

Read SOF's Matt's DOOL Musings. Here’s a taste of what he wrote…" The rest of the week was far more random. It was so random that the editors were actually cutting in pieces of twenty year old episodes just to fill space without any explanation."