Soaps.com Chats With Days of our Lives’ Deidre Hall 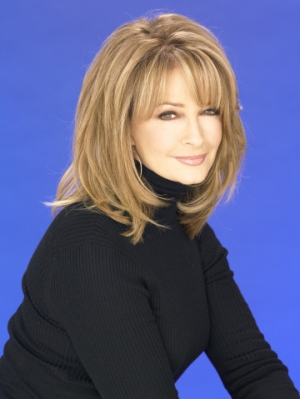 “Every story has a profound change.”

Soaps.com recently sat down to chat with “Days of Our Lives” veteran Deidre Hall, who will make her highly anticipated return to Salem next month as Dr. Marlena Evans. Read as Deidre dishes about her return to “DOOL,” the Marlena and John connection, what’s in store for fans of the show, and much more!

Soaps.com: What have you been up to since we last saw you on “DOOL?”

Deidre: It’s been a replenishing time. I’ve had the chance to travel with my children, which was a little unpredictable in other years. I took my son David to Brazil where we did a mission with “Operation Smile,” working with tragically disfigured children. He was 16 and it was life-altering for both of us. We went to Washington, D.C. for the Child Nutrition Act renewal. We spoke to members of congress, and were at the White House. Just to travel through D.C. and have a point of view that we thought was important to share, and to finally see the Nutrition Act renewed, that was very reassuring.

Soaps.com: I hear you’ve written a book as well.

Deidre: Yes, I also wrote a book in my spare time with my closest friend Lynne Bowman. It’s called “Deidra Hall’s Kitchen Closeup” and it’s available on Amazon.com. It’s an easy read, a great and funny book about the dreaded words that mothers hear every single night, “What’s for supper?” The book is the answer to that question.

Soaps.com: Viewers of the show were outraged when you and Drake [Hogestyn, John Black] left “Days” in early 2009 due to budget cuts. Share with us your take on that departure.

Deidre: The departure was as unexpected by us as it was by the audience. It wasn’t a thing that either of us would have chosen. With that said, it was also a dreamy two-and-a-half years for me. It was a time where I was meant to be home. You know, God does for you what you can’t do for yourself. My son was getting ready to apply to colleges, my little one was getting ready for high school, and I got to live what was more of a real life than what I’ve ever had. I wrote a book, was able to travel, I slept in, I changed my diet, I lost weight. I did lots and lots of things.

Soaps.com: How did your return to Salem come about?

Deidre: It really is the brain child of Greg Meng, who is now the co-executive producer of “Days.” I had written my book and Greg had written a book called, “Days of Our Lives 45 Years: A Celebration in Photos,” and we went on a book tour together, just for fun. Every face coming up to the table would say to me, “When are you coming back to the show?” and my answer would always be, “I have no plans.” At one point, a woman approached the table and asked me what it would take to get me back. The most compelling reason for me to go back would be to work with Greg Meng, a man of enormous intelligence and integrity, and a great and bold leader. I looked at Greg and said, “I would have to be invited.” He turned to me and said, “You’re invited.”

Deidre: Normally, yes, but because of who Greg is, I thought, "This could be interesting." He set about changing the look of the show, which was overdue and a welcome change. He hired new writers that were more in line with the old tradition of "Days of Our Lives." He, himself, is co-executive producing with Noel Maxam, who is a brilliant leader, great with people and great with story and great on set. Together, they have made a show that just got a two-year renewal, a show that I think will stay on the air for some time. We've gone back to what you love.

Soaps.com: You and Drake are returning to the show at the same time, but there's speculation as to whether your characters will actually return as as couple. How do you feel the relationship between Marlena and John should play out?

Deidre: The John-Marlena love connection is so strong. They have made these characters more bonded than they were even two-and-a-half years ago, and it's delightful to watch.

Soaps.com: How long are you back for?

Deidre: I would like to tell you, but unfortunately can't as per my contract.

Soaps.com: Over the years, Marlena's been known for her peaceful demeanor, which perhaps could have helped steer her family members in more positive directions. Does Marlena feel guilty about not being part of her children and grandchildren's lives for so long?

Deidre: "Guilt" is a word that Marlena doesn't understand. She had a priority in her life, it was saving her husband's life, and she set about doing it. And she's been in touch with the people in Salem, through her grandson Will [Horton, Chandler Massey], which will turn out to be another wonderful storyline. She is back, she is a leader extraordinaire. She will grab her family by the throat. I think the two-and-a-half years have enriched her character. What you used to know as her loyalty and devotion is now fierce loyalty and incredible devotion.

Soaps.com: Sami [Brady, Alison Sweeney] could certainly use some moral support and guidance after what she's been through lately. What's coming up between Marlena and Sami?

Soaps.com: Is Marlena still going to be working as a psychiatrist when she gets back to Salem?

Soaps.com: Any other hints or spoilers about what's coming up when Dr. Marlena Evans returns to Salem?

Deidre: Just know that it's the Salem that you know and love and trusted. If you've fallen off in the last ten years, it's high time to come on back. The writers have been making changes as we go along, but the new show really hits the canvas on September 26. It does not disappoint. Every episode has twists, every story has a profound change. You can't look away.

Check out Soaps.com Chats With Days of our Lives' Drake Hogestyn for more on John and Marlena's return! Join us on Twitter @soapoperafan, and Facebook. Come tweet and Facebook with us about "Days of Our Lives," all the other soap operas, "Glee," "Grey’s Anatomy" and "Vampire Diaries!"