Soaps.com Chats With Days of our Lives’ Drake Hogestyn 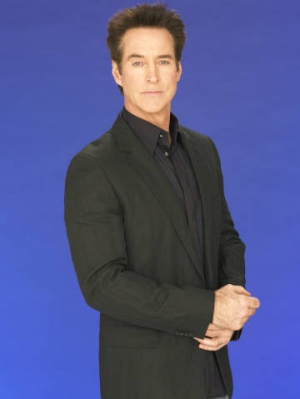 “There’s still some darkness in John that Marlena is worried about.”

Soaps.com recently sat down to chat with “Days of Our Lives” veteran Drake Hogestyn, who will make his highly anticipated return to Salem next month as John Black. Read as Drake discusses his return to Daytime television, why John and Marlena are back, which form of John the viewers can expect to see, and much more!

Soaps.com: What have you been up to since we last saw you on “Days?”

Drake: You know, I have worn a lot of different hats and there’s been a lot of different things I’ve wanted to do over the years. But since leaving “Days,” I’ve been left emotionally void. I don’t get the sweaty palms, I don’t get the creative juices flowing. I realized in stepping back for two-and-a-half years that, my God, I’m an actor! [chuckles] I had never really embraced that moniker before. But realizing that I did it for 23 straight years, to the day, on “Days of Our Lives,” this is what I am. I couldn’t be happier to be back and to know that Deidre [Hall, Marlena Evans] is right there with me.

Soaps.com: Discuss your shocking exit from the show in early 2009.

Drake: Things were changing rapidly with the budget, with all shows. That was kind of like the first shot across the bow to wake up Daytime that we had a serious problem. Nothing was being done, so that was the first shakeup. Did Deidre and myself welcome it? On my behalf, I would say, “No.” I didn’t want to leave. I’m emotionally attached to the show, and even not being a part of the physical fabric of the show, I remained emotionally attached. I was hoping somewhere down the line that there would be a return, but that wasn’t a guarantee.

Soaps.com: How did your return come about?

Drake: “Days” has been on the air for 45 years. It still has a huge audience out there that left for whatever reason, maybe because some of their emotional favorites had left the show. My take on the whole thing is that the older audience needed to be respected. They’ve been faithful year in and year out, and once they find out that “John and Marlena” are coming back to the show, they’re going to turn that set back on. Once the TV’s tuned in, the younger eyeballs will ask, “Hey, Mom, what are you watching?” Check this out, I had a guy here the other day that was pumping my septic tank and was like, “Oh my God, you were on “Days of Our Lives!” My mom used to watch and I’d think she was crazy, but then I started to watch a bit myself.” [laughs]

Soaps.com: Was anyone in particular responsible for asking you back?

Drake: What sort of precipitated this whole thing was that Greg Meng, who’s now an executive producer on the show with Noel Maxam, called and wanted to know if I’d be interested in going to Houston as part of his book tour. I said, “I would love to!” So I went down there, and was just overwhelmed by the support from the fans. I was sitting next to Greg and all the people coming up would say, “When are you coming back to the show? Who do we need to talk to?” And I would say, “You could probably start by talking to Greg right here!” [laughs] Greg was very perceptive and one thing led to another. I got a phone call from him and it was time to go to work. That was the best day.

Soaps.com: Well the “Days” audience is certainly glad to have both you and Deidre coming back…

Drake: I’ve got to tell you just one more thing about this. There’s an unusual saga behind my return. I had talked to Greg on May 12, which is my father’s birthday. I lost my dad last year on July 11. Well, Greg sent over the contract and said my starting date would be… July 11! I was like, “Oh my God. Thanks, Dad. I was wondering when you were going to get in contact with me!” [laughs]

Soaps.com: How long are you back for?

Drake: I signed a two-year deal, but you know, I think at any point they can tap me on the shoulder, wake me from my dream, and say, "Thanks, it's been real." [laughs]

Soaps.com: What can viewers of the show expect once John and Marlena get back onscreen?

Drake: I think the two crucial elements that make any soap opera great are engaging stories and compelling actors. "Days" has got both. Marlene McPherson and Darell Ray Thomas, writers who have been here before and know the history of the show, they are redefining the characters in black and white. The audience is going to be in for a ride, starting September 26. It's a new and revitalized "Days of Our Lives," and you can't miss it.

Soaps.com: Fans on our message boards have been waiting for "Days" to get back to what it used to be.

Drake: Let me tell you this. On my first day back to work, it took me three hours to get from my car into the dressing room. I walked down the main way and all of a sudden, all the camera men are like, "Drake!" And then out comes Matt Ashford [Jack Deveraux], Missy [Reeves, Jennifer Horton], Christie Clark [Carrie Brady] and Patrick Muldoon [Austin Reed], and we were all laughing and crying and shaking. It is old school again. The energy is through the ceiling. Everybody is excited, from the makeup room all the way down to the crew on the floor.

Soaps.com: Are John and Marlena returning to Salem simply because John's rehab is complete, or is there another form of intrigue surrounding their return?

Drake: They've built this huge set called the Horton Center, and it spans the entire length of NBC. Anyway, it's the dedication of the Horton Center. John and Marlena come back, and it's the very tail end of John's rehabilitation. He's not really strong on his feet yet, but he's getting there daily. They make the appearance, and as soon as they do, there's an event that... well, let's just say, certain people have been waiting for John Black to get on American soil. [chuckles]

Soaps.com: Old John was romantic and loving while nu-John was a little more funny and straightforward. Which John will we see return to Salem?

Drake: I think you're going to see the old John. The romantic, the provider and the protector. Nu-John was an interesting character to play, from the standpoint that he didn't have any emotions and therefore no social censors. He was able to say whatever was on everyone's mind. It was a very liberating experience for me, as an actor. The enjoyment and the funny side of it wasn't written like that, it was just the perception of the situation. There's been some indication in the writing that there's still some darkness in John that Marlena is worried about. Whether they explore some of that, I don't know.

Soaps.com: Does John's return have anything to do with EJ's current vendetta with Brady? Will we see John reconcile with the DiMera family?

Drake: I would have to say that there's an ongoing relationship with the DiMera family, and I think it's back in the realm of Stefano [DiMera, Joseph Mascolo] and John's adversarial relationship. You know, the DiMeras are not to be trusted. I think what's happening with John right now, and the situation he's going to be thrown into, is primarily instigated by the DiMeras. I'm excited to get back into battle with those two again.

Soaps.com: Any final words for your fans?

Drake: Stay tuned on September 26. Marlena and John promise to not disappoint. Get ready for a whole new "Days of Our Lives 2.0."

Check out Soaps.com Chats With Days of our Lives' Deidre Hall for more on John and Marlena's return! Join us on Twitter @soapoperafan, and Facebook. Come tweet and Facebook with us about "Days of Our Lives," all the other soap operas, "Glee," "Grey’s Anatomy" and "Vampire Diaries!"