Joseph Mascolo Speaks Out on Leaving Days of our Lives 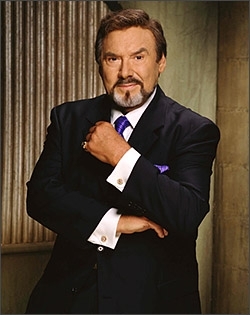 Soaps.com previously reported that Joseph Mascolo’s option was not picked up on Days of Our Lives, which means he and Stefano will not be seen in Salem anytime soon. While it’s sad for fans of the dastardly DiMera, the news was even harder to take for the actor.

As told to Soap Opera Digest, Mascolo, who has played Stefano on and off for 25 years, didn’t hold back when it came to his feelings about being let go. “As much as I love Ken Corday (Days’ Executive Producer), I am so deeply ashamed of what he allowed to happen to one of the greatest characters they ever had in Stefano,” he sighed. He continued to express his disappointment over his return to the soap last year by saying, “I wanted to make sure it was going to be done right and that the new writer would be at least worthy of it. And so I said okay and they had Stefano in a wheelchair more than they had him on his feet. And that whole story about the background that I thought could have been interesting? They turned it into a comic strip and it went on forever. It was all wrong.”

Mascolo furthered his dissatisfaction over leaving by pointing to the missed opportunities following the reveal that John is actually Stefano’s brother. He also says in the article that he feels “double-crossed” by the show because he trusted they would restore Stefano to the powerful character he once was, but instead they took him off the canvas.

Fans of Days and Stefano in particular, will recall that he came to Salem in search of his son Tony in 1982 and has terrorized the good people of Salem ever since. Over the years, Stefano’s evil deeds have included kidnapping Marlena several times over and opening her soul to be possessed by the devil, brainwashing John Black more than once, changing his nephew Andre’s face to look like Tony’s so they could plan multiple murders and pin them on Roman, bribing a judge to convict John of killing Tony (which of course he didn’t do) and countless other sinister deeds. He has probably “died” more times and in more ways than any other soap opera character, but as we all know, the Phoenix always rises!

Most recently Stefano returned after recuperating from receiving John’s kidney, which EJ had forcibly taken. While recovering in Salem, he was busy reprogramming the once presumed dead John, who he instructed to kill Colleen Brady, but we all know how that turned out! To avenge the loss of her husband and all of his evil deeds, Marlena injected Stefano with a drug that has left him in a vegetative state ever since.

As for a possible return to Salem, the veteran actor joked, “They would have to come on bended knee.” Mascolo did however tease that he has received other job offers and indicated that he would like to get back to working in the theatre.

Now that he’s no longer working on Days, could one of his offers be a return to The Bold and the Beautiful as shipping magnate Massimo Marone? We’ll have to wait and see, but while we do know Mascolo and Stefano will be sorely missed on Days, we have no doubt we’ll see the actor again soon.