Enabler.
It was good to see Jenn finally stop being Carly’s enabler. Their screaming match was well done, but don’t think Carly’s out of the woods just yet. We’ll see a few more stumbles before she goes to rehab. I’ve an issue with Quinn not knowing who Carly was when he saved her. Vivian would have shown him a photo. Still, I’m curious as to what Quinn will do with Carly, knowing she’s the woman he and his mother are after. I feel for my poor Gus, who, because of Quinn, is thrown away like yesterday’s newspaper.

Highlight of the week? Vivian's chamber maid disguise. Very old school "DOOL." This is what I want to see more of!

SPD.
Bo was demoted, but he didn’t seem to mind at all. Neither did I. The job never suited him, and neither did the style of dress. Poor Roman has no life outside of SPD so he gladly took over as commissioner, and I think he’ll do a better job.

Beach bums.
The younger crew went to the beach for the second time this summer. It’s nice to see. I’d love to see some of the other Salemites mingling at the beach, too. Maybe some romance? Maybe a pool party at the Kiriakis mansion? Is there still time to write a little in at the end of the summer? Vote if you want to see more of summer in Salem.

Coupledom.
Dario and Melanie’s flirtation stepped up this week and they finally started kissing and appearing more like a couple. I still don’t find any chemistry. He’s sort of become her caretaker, which also does nothing for me. She’s supposed to be stronger than this. I blame Maggie, who has made her too much of a Good Samaritan.

Victor gave Tad a dressing down that Maggie saw which somehow made her ready for a relationship with the tycoon. I found it completely ridiculous. It made no bloody sense to me what they were arguing about in the first place, so why did seeing Victor in action make ole Maggs randy for Victor? I hope they’re together for good, only because I’m wary of the constant waffling. Other than that, I no longer care what this "couple" does.

The weak writing with Chad and Abby has quickly changed. It was Thursday’s show that made me realize this is the only couple who has something going for them and who seems to be doing well. They’re probably the most mature couple and one who we can root for. I might be a Chabby fan.

That’s all I’ve got this week. I’d love to hear your thoughts on what happened in Salem. Don’t forget to read SOF's Matt's DOOL Musings! Here’s a quote from this week’s blog. "He [EJ] showed off that rare martial art that only the British have ever mastered: being able to twist someone's wrist and threaten them while sipping tea daintily." 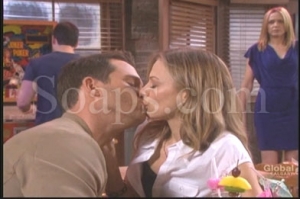 A lot happened this week to further each storyline. Could it be that the shows airing this week and last are the ones that were rewritten? There’s a lot of talking, and they’re moving at a very fast pace. I gather these storylines need to be wrapped up before August 26. I’ve not much to say this week, but let’s get down to it.

Have you heard of poison?
Kate tried instructing Nicole in the art of poisoning her sister in order to keep her from her man and from ruining things around the DiMera household. Nicole didn’t have the heart, so the two DiMera wives commiserated over loving DiMera men. It was fun. These two have great chemistry and should get to know each other better.

A wolf in sheep’s clothing?
Taylor sure has changed for the better. She’s finally interesting. Why did she kiss Brady? Was she just drunk? Was he really drunk? It isn’t really in her character to do so and he is her boss! She sure isn’t the Taylor we met who stammered and stared. Did you get a load of the way she looked at Quinn? Do they know one another?

Bring him to his knees.
Sonny made a friend in Kinsey, after telling her that if he was straight he’d be ‘all over that’. Tad continued to blather on about how disgusting he thought Sonny is. Victor made it clear that he has no issue with Sonny being gay. We both found it generous of Sonny the way he treated Tad. I’m not sure I’d have been as easy going but then I haven’t faced this discrimination.

Days of our Lives Spoiler Video: Searching For Carly