Read more about her new series by checking out Days of our Lives' Shelby Young Joins The Cast Of American Horror Story. Join us on Twitter @soapoperafan and Facebook. Come tweet and Facebook with us about "Days of our Lives," all the other soap operas, "Glee," "Grey’s Anatomy" and "Vampire Diaries!" 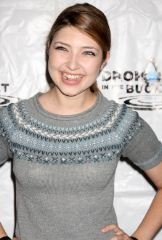 Shelby Young (Kinsey) is leaving Salem behind. According to Soap Opera Digest, the actress has already shot her final scenes. Fans of her work will be able to catch her on Primetime this fall. She’s already filmed a supporting role in the new series “American Horror Story.” Kinsey fans will be able to see the character until the end of this summer with more plot than she’s ever had.

Shelby was cast on “Days of our Lives” as the recurring character in 2009.