Philip Kiriakis Takes Charge on Days of our Lives! 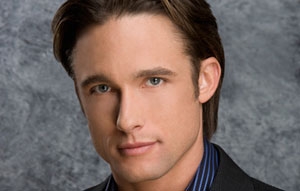 When Jay Johnson returned as Philip on Days of Our Lives in 2007, it seemed he didn’t have much to do without it involving Belle. Ether he was battling her for custody of her daughter Claire, chasing her while she and Shawn were on the run or trying to get her into bed. Once Belle left Salem, we wondered where that would leave the floundering Kiriakis. Roughly two months later, we couldn’t be more pleased to see that the character of Philip has never been stronger.

Business wise, Philip is taking over the reigns of the Kiriakis empire, plotting against John Black and going up against customs official Paul Hollingsworth. He seems poised to take over where the manipulative Victor left off, all with confidence, cunning and style.

On a personal level, Belle choosing Shawn over Philip and leaving town seems to be the best thing that ever happened to him. Without her to distract him, Philip’s got a flirtatious battle of the wills going on with Morgan, a no-strings fling (at least for now) with his former high school girlfriend Chloe and has been targeted by his father’s gold-digging ex-wife Nicole. However, when it comes to the latter, we have every confidence Philip would use her as much as she would him.

There’s definitely possibilities with each intriguing woman for Philip, as his portrayer, Jay Johnson, has chemistry with all three actresses, Kristen Renton (Morgan), Nadia Bjorlin (Chloe) and Arianne Zucker (Nicole), which makes it difficult to choose who to root for. While we don’t know who Philip will end up with or where his business dealings will lead him, we’re certainly enjoying the ride this stronger, sexier and more confident Philip is taking us on.

Joseph Mascolo Speaks Out on Leaving...