Read about how "Days" will be revamped this fall by checking out Days of our Lives Resetting. Join us on Twitter @soapoperafan and Facebook. Come tweet and Facebook with us about "Days of our Lives," all the other soap operas, "Glee," "Grey’s Anatomy" and "Vampire Diaries!" 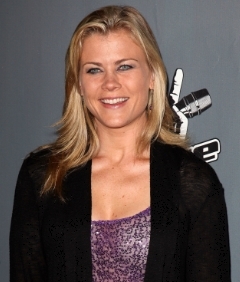 Another side of Alison.

After airing the pilot for “Hollywood Mom’s Night” in November, the TV Guide Network has ordered five episodes of the series. The show will be produced by Ellen Rakieten Entertainment and RelativityREAL.

Five episodes are slated to air next March.

News of the series spawned a mini Twitter battle with Lisa Rinna (ex-Billie), although it looks like they’ve cleared the air between them. Rinna tweeted, “I am not a part of this new “Hollywood Moms’ club” on the TV Guide Network. Ali and Ali sold the concept without us and we are now finding out. They went out and sold the show with out any of us knowing. We are just finding out about it now. Wow. Just when you think you know people. This business is something isn’t it?! It’s never good when people are sneaky and go behind your back especially friends. Then you see it in the press! Yuk!” Later, she sorted things out with her old “DOOL” co-star. “I let the girls – Ali and Ali know my feelings. I was very honest with them. Just vent tweets I guess – ok I’m done now. It’s all good. I shouldn’t vent on twitter but I’m human. 🙂 I can’t help it. Even if I’m mad, I always try and find the positive in every situation. Ali Sweeney I send you praise and blessings. Thank You for the apology I so appreciate your honesty! Thank you!! Forgiveness,” Rinna later added.

The Biggest Loser host Alison Sweeney (Sami) continues to take on reality TV with a new show. Soap Opera Digest is reporting that she has teamed up with Ali Landry to host TV Guide Network’s latest series, “Hollywood Moms’ Club.” The series showcases the two actresses having supper with various celebs from the world of reality TV and Daytime. Former “Days of our Lives” star Lisa Rinna (ex-Billie) has already been tapped for an appearance.

Look for the pilot episode of the new series to air in November.

Days of our Lives Spoiler Video: Melanie Has A Lot On Her Mind