Major screw up?
Bope let Arnold out of their sight in order to perform the happy dance and do some mild gloating about the DiMeras, and their witness was murdered. I wonder if EJ or Stefano ordered a cop to put the convicts in with Arnold, or if SPD really is useless enough to make that grave of an error. Vote in my poll: Was Arnold's murder a coincidence? I’m thankful EJ and Stefano stayed out of jail. We need our villains. The show seems to be going vanilla on us by bringing back boring characters. If this show turns into the Horton and Brady show, and I don’t have my villains, I may have to resort to injecting myself with adrenaline every day at 3:00 PM just to recap the show. (Like I haven’t yet?) One thing I’m curious about is that he signed a statement implicating Stefano and EJ, so why were they released? I figure the signed statement would be admissible in court.

Ejole.
EJ and Nicole kept me riveted once again with their banter, him clutching his head hole and her squeezing it while he was writhing in pain. Ten minutes later, Matt and I were still laughing. I’m smiling as I type this. As for Taylor, I have a hard time believing she won’t forgive EJ, even though she protests she won’t.

Open mouth wide and insert not just one but both feet:
Samanther had some scary delayed reaction to what EJ did and went psycho on his desk as any child would do. Her insecurity got the best of her and she couldn’t bear that Rafe had a female partner. Oy. Can’t we keep Sofia with Rafe and get rid of Samanther? Sofia and Rafe? Ellos tienen mucha química entre ellos. (They have great chemistry.) PS Thanks Scott!

He should be a cop again.
Abe ran himself ragged all over the hamlet that is Salem in order to tell Lexi, Taylor and Nicole face to face about Arnold’s murder. It’s the most he has had to do in ages. And who knew that SPD was in the woods and looked like a log cabin from the outside? I remember John Black’s office with all the skyscrapers in the windows. I guess John was in another realm?

DA Woods.
Great return. If anything, Woodsy has gotten meaner during his absence. What a fantastic scene with Woodsy and Chad at Cheatin’ Heart. I hope we see more of this. Give Chad less canoodling with Abby and more drama.

Jenn, Dr. Dan and the third wheel.
That’ll be the day I drown my sorrows in drugs after seeing the one I love smooching another. I didn’t know Higley could make a female more pathetic. It’s all too easy for Vivi, Gus and Quinn to help her addiction along. Oh and Jenn and Dan? Zzzzzzzzzzzzz.

See you on Twitter @soapoperafan, and Facebook and for goodness sake, don’t forget to read SOF's Matt's DOOL Musings! This is what he says about Chloe this week: "Chloe got job advice from Kinsey, who pointed out that there was work outside of the four blocks of Salem she never leaves." Hmm... 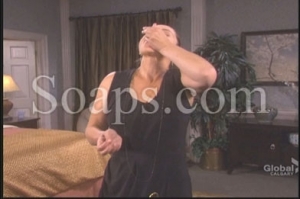 What a week. I got my subtitles, Arnold was murdered, EJ gave custody over to the worst mother in the history of soaps, and it’s confirmed that Bope is as equally dumb as RoboRafe Arnold Finnegan, may he rest in peace.

“I’m Here, I’m Queer, He’ll Get Used To It.”
I could have done with more drama for Sonny’s coming out to Victor. He didn’t actually say whether or not he cared if Sonny was gay – only that he feels sorry for him and worries how others will take it. T somehow thinks Sonny “lied” about being gay I guess because he didn’t introduce himself as ‘gay Sonny’ or maybe T just thinks every gay man in a 20 kilometer radius wants his bod. Likely though the reality is that T fears what he doesn’t understand.

“Making Will gay.”
I need to finally address this. Nobody’s “making Will gay.” They’re telling a story about coming out. It’s more realistic than most stories on “DOOL.” I’ll quote my friend Dustin Cushman, former owner of SoapOperaFan.com, who used to say to the homophobes, “You sat through abortions, murders, attempted murders, rapes, devil possessions, incest, prostitution, adultery . . . all for entertainment . . . yet it’s the idea of a gay character that upsets you?” It’s usually what one hasn’t been exposed to that brings on fear. Those still afraid – face your fears! You may find that which you fear doesn’t even exist.

“Easy, stupid and a pig.”
Arnold Finnegar (may he rest in peace), thought with his penis more than his brain, so it didn’t surprise me that he didn’t bat an eyelash when Bope, who together are about as smart as Arnold (may he rest in peace), did the bizarre and slipped fiery Sofia in the cell with him in order to get a confession. It was the highlight of the week. I like Sofia and love Robo/Arnold’s first response to her, which was one of Stefano’s fave sayings, “Aiyaiyai.” It was crazy funny watching Sofia touching his knee and him using that silly dumb smirk and touching his crotch! He’s such a pig! Hilarious! How sad that he’s gone and the real Rafe isn’t nearly as fun.