Still couldn’t care less.
John and Marlena are returning September 26. I’m still not excited though I was always a Jarlena fan. I detest the way they were fired despite an outcry from the fans, and now, three entire years later, Corday suddenly clues in that they may have been integral to the show? Not to mention six actors were fired in order to what – pay these two actors? Why? Why have them return now? How are they going to fix the show? One of my tweeps, Jason Bruss says, "The dialogue of "Days" is killing the show. It's not the lack of 'legendary' characters; it's the lack of great writers." The humourous quips are what keep me going, daily but Jason’s right. If the story and dialogue isn’t there, there isn’t a show. Case in point with Chad and Abby, who are extremely mind-numbing always dishing on whose father is the most rotten each time they’re together. Zzzzz Remember how Sami and EJ used to relentlessly jabber on about how each other was a great parent when they were together? Maybe the dialogue will get better now that Higley’s gone.

Nic and her little friend.
Again I enjoyed the dynamic between Nicole and Kinsey. Who knew Kinsey had depth? Nicole needs a project and Kinsey needs somebody in her corner. Nic demonstrated growth when she offered Kinsey help with college.

Ivan returns.
A "DOOL" rep tells me that Ivan G’Vera’s returning as Ivan, Vivian’s original manservant. I love Ivan and Vivian, but why can’t he return and stay with Vivian? John’s returning and yet they’re getting rid of his aunt? I don’t care if I’m a broken record about this. I think it’s a huge mistake to let Vivian, who once was a scene stealer go. Maybe if they write for her properly instead of watering her down… Are you with me? Vote for Vivian to stick around Salem! 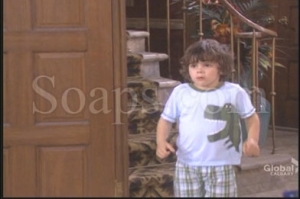 Another fast-paced week with loads of chatter. If you’re not watching, you’re actually likely to miss out on something. A few things stood out for me. The theme of the week was “Go ahead. Let me have it. Tell me you told me so.” Thankfully, nobody did. The dialogue was copied and pasted from past episodes as usual and I recognized this week that I’m no longer a fan of Jennifer, who is a bore without Jack. The one thing that stood out for me was Chad and Abby talking about how EJ never blinked once when he was going about his evil business. EJ? Never blinks? Hmm.

EJ and Stefano are culpable to some extent.
When EJ learned Faye was murdered by “Rafe,” he immediately felt guilty and apologized to Taylor, realizing he’s partially responsible for her murder. So is Stefano and of course RoboRafe takes most of the blame considering it was at his hand. EJ and Stefano are of course also accessories to rape, and other misdeeds. EJ reason? He said he was desperate. He’s a jealous and insecure man, desperate to keep Rafe from being a father to Johnny. Not Sydney. Johnny. Instead of ruining Samanther’s life, he could use that energy to be more of a part of his children’s lives. I don’t know which parent is worse or which spends less time with the children. I guess EJ doesn’t know that there’s room for him and Rafe in Johnny’s life. Stefano did the Kate thing and disowned EJ, but shortly after recanted his words and now they’re buddy buddy again. If EJ had simply taken care of Rafe or Arnold Finnegan (Arnold?! Really?) to begin with, they wouldn’t be in this predicament. I felt for EJ losing Johnny (I know. Crazy, right?) though I think it’s deserved. What he did to Nicole with Taylor and to Sami and Rafe was beyond forgivable, not to mention how he allowed some petty criminal around his kids he claims to love. He never learns. Sami, who panics over a half-full tube of toothpaste, didn’t seem too put out on the pier about EJ seeing the kids. What’s that about? At any rate, I’m so tired of this storyline. I really want to move on and see other characters for a change.

Ignoring history.
It’s baffling to me that Jennifer would accept Jack’s simple text message. It baffles me that she’d stop seeing Daniel just because her friend Carly made goo goo eyes at him. She’s such a doormat. She needs to get off her arse and hire an investigator already who will lead her to Jack, so she can find out what’s going on and then move on with her life – if that’s what she wants. And instead of babbling to her daughter about her relationship woes, she should talk to another adult. Like Hope. She really is a bore without Jack and it’s compounded with dull Daniel in her life. And will somebody please do something with her hair? The blonde/grey lifeless colour needs a lift and some Moroccan oil. Pronto. She’s a beautiful woman who should not have her gorgeous locks neglected.

Days of our Lives Saturday Teaser Poll: Taking It Badly