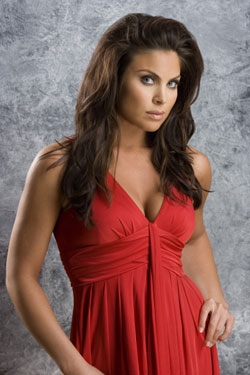 Nadia Bjorlin and Brandon Beemer on the Days set (NBC)

After last year’s overwhelming success, the 2009 Soap Cruise is gearing up for another amazing voyage. With 14 stars scheduled to attend so far, fans will have the incredible opportunity to meet their favorite daytime actors and vacation with them for four days! It certainly doesn’t get any better than that for a soap fan. One actress fans can expect to see aboard the Celebrity Cruise ship is Nadia Bjorlin who plays Chloe on Days of Our Lives. Nadia recently took some time to talk to Soaps.com to discuss the cruise, as well as her return to Days.

Even though Nadia attended the cruise last year, she was simply a guest of her boyfriend Brandon Beemer (ex-Shawn, Days), who was there in an official soap capacity. This time the roles will be reversed, as Nadia will be on duty, while Brandon will get to kick back and relax. That’s the plan for right now anyway, as Nadia joked, “If he’s good I’ll bring him. If he’s behaving he will be definitely there.”

Considering she’s returning for the 2009 Soap Cruise, I assumed her experience from last year left quite an impression. Nadia confirmed my suspicions, stating, “I had a lot of fun last year and I think people would be crazy to not want to go. It was just a great time in every aspect of the word and I think for fans it’s probably the best fan event you could ever go on.”

Regarding the many returning and first time attendees, Nadia shared, “I know Greg Vaughn (Lucky, General Hospital). I love him and his wife. His wife is coming. Jacob Young (JR, All My Children). He was so much fun. Austin Peck (Brad, As the World Turns; ex-Austin, Days), obviously he used to be on Days. Don Diamont (Brad, The Young and the Restless) and his wife were there last year and they were so lovely. Christian LeBlanc (Michael, Y&R) who I adore. He is just one of the funniest people on the planet. Winsor Harmon (Thorne, The Bold and the Beautiful) as well. Love him. And Jay Johnson (Philip, Days) is coming on board this year. It will feel like friends and family. And Ricky Paull Goldin (Jake, AMC; ex-Gus, Guiding Light). I know him as well. A couple of the other people I don’t know, but it will be fun to meet them.”

So far fans can expect to participate in “Meet and Greets” with the actors, receive autographs, take photos, act out scenes with the celebrities, play soap star trivia and attend cocktails parties. Aside from all the planned events, passengers on the cruise will also have access to nightclubs, casinos, movie theatres and live entertainment on the ship. And since the stars are on board the entire time, you just might find yourself sitting at the same blackjack table or drinking margaritas at the bar with one of them!

With the cruise still months away, that gives Nadia plenty of time to explore new territory with her character Chloe. Territory she’s not even clear on, as she doesn’t know what’s happening with her character until she reads it in her script. For now, she’s enjoying how Chloe is being written, explaining, “She’s more of an adult. She’s more worldly and sophisticated, but there’s also sort of a sarcastic and cynical thing about her now that’s different and fun to play.”

Nadia is also pleased that things are starting to get a little juicier for her since she first came back to Salem. “It’s certainly picking up for me now and I’m getting more of a storyline and things are starting to get resolved with the whole Brady situation, so I’m happy about that,” she laughed. As for the recent reveal that Victor was behind Brady’s disappearance, Nadia was happy with how it was handled saying, “I think they did the most clever thing they could without having the character come back into town and without recasting the role. I thought it was pretty clever the way they handled it, and it is a soap opera after all and it certainly did create an element of drama.”

Sadly for Brady fans, it doesn’t look like the character’s coming back anytime soon, but for fans of a different paring, Nadia teased, “I think that Philip and Chloe fans will certainly be pleased in the next few weeks.”

For further insight into Nadia, as well as her character, the very open actress gladly answered a few of your questions:

Youngesoapwatcher: If you could be on another soap which one would it be and why?

Nadia: That’s a tough one. God I don’t know. I’ve honestly never thought about this before and I don’t know if I should even give an answer because I don’t want to seem biased towards one soap or another.

Sassafras: Who would you most like to be connected romantically with on the show?

Nadia: Wow, good question. I never really thought that one person in particular would be good, but it would be kind of fun to explore something different than Chloe has been able to explore. I mean obviously I’ve had a lot of fun with the whole Chloe and Philip and Chloe and Brady thing, but you know I think it would be kind of fun to create some controversy and stir things up. Maybe a Chloe and EJ thing or Chloe and Dr. Jonas. I mean we all joke on set and go, ‘Ooh, who are they going to hook up next?’ I think the good thing is we all like each other so we don’t have a problem with whatever direction they take it in. There’s a lot of cute men there so I wouldn’t complain, I’ll tell you that. There’s not one that isn’t cute.

Nadiafan2008: Since you've worked with Jay for so many years is it easy for both of you to work off each other in your scenes together?

Nadia: I thing there’s such a camaraderie and trust and respect between both of us that’s been built for years that we truly enjoy working with each other. I have so much fun working with him. We have such a great time. It’s certainly a pleasure and a lot of times you don’t even feel like you’re working.

P32007: How did you feel about Brandon being let go? Did you have a problem with how it was handled?

Nadia: Obviously I was sad that they let him go because I was getting to work with my best friend. That was pretty fun and that was short lived, but as an actor you sort of have to deal with the business aspect of things and know that you can’t necessarily take things personally. If a decision’s made, a decision’s made and for whatever reason a decision is made you have to accept it and know that it’s out of your hands, out of your control. You can’t really think any differently about it and it could happen to absolutely anybody. I can’t say I think it was a smart decision necessarily, but it was what it was for the time. I’m such a believer that everything happens for a reason and it’s just a part of life, especially as an actor, that makes you stronger. It’s cliché, but when one door closes another one opens and I’m such a firm believer in that.

[The day after our interview, Soaps.com learned that Brandon Beemer had been cast on The Bold and the Beautiful as an undisclosed character.]

Luvphilejchloesami: Nadia how do you feel about the conclusion to the Brady missing storyline?

Nadia: I personally was kind of glad that they didn’t take it in the approach that Chloe had done something, that it was Chloe’s fault or that Chloe killed him or had been unfaithful or whatever it may have been. I’m sort of glad that in the best manner they could, they didn’t really taint the relationship in that sense and they left the characters with integrity.

Sugafree also wondered if Nadia was planning to work on more films, but Nadia told me right now she’s busy with Days and her music, as she is planning to record an album and possibly tour with her two brothers.

I’d like to thank Nadia for taking the time to talk with me and look forward to seeing who Chloe will be paired up with in the future.

If you’re thinking about attending the second annual Soap Cruise in 2009, be sure to read Chrissi’s report of the 2007 Soap Cruise to find out how much fun you will have. If you are unable to go, you can be sure Soaps.com will bring you a first hand account of all the juicy details!