Ghosts.
When Faye returns to visit her daughters, I’m thrilled. When Lawrence turns up to taunt poor Carly, it feels off. The whole Carly storyline feels off to me and frankly, if Lawrence never returned I’d be happy.

"Don’t call me ‘ma’."
My Vivian is starting to trust Quinn, and I look forward to them teaming up against Carly, which shouldn’t be too difficult now that Quinn’s got his goon on the job.

Taylor’s behaviour.
Nothing has changed that should have Taylor justifying having sex with her sister’s husband yet there she is, doing it. I hope she learns from the pain she’s about to experience. She can’t say nobody tried to warn her. Ah "love" is blind.

Sheer brilliance.
It’s good to see Nic and Brady friends again. I’d also like to know who wrote the hysterical drunken scenes where Nic offered the Rafe impostor to trim his eyebrows and where she groaned, “Bad enough there’s one [Rafe}.” This storyline has done a lot for Rafe for me and I hope that when it’s over, Rafe doesn’t go back to his dull ole self.

My poor Chloe.
Chloe had sex with a john this time. His name, appropriately was "Randy." This means Kate or Quinn will soon out her as a prostitute and she’ll lose Parker. I can’t think of anything that could stop it and I feel for her. She really is trying to get her life on track.

The non-triangle.
Dario saw Brady about to admit his feelings for Mel and stole Brady’s moment by not only telling Melanie what Brady wanted to say, but he also, in his little 12 year old boy way, told her he like likes her, too. She replied, not by throwing up in her mouth, but by admitting she has already found the guy she’s meant to be with. Him. I threw up instead. This whole storyline is absurd, awkward and a freaking bore. It’s Daniel and Jennifer all over again. September cannot come soon enough.

Last thought. What happened to my Anna? I want my Anna. 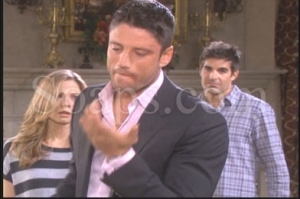 This week went by at breakneck speed. It was very ‘chatty chatty’ and a lot happened to further the RoboRafe storyline as I like to call it. I’m sure it was written to be exciting, but execution left a lot to be desired and Samanther whining like a little 6 year old had me wanting somebody to give her a left hook, the way she did EJ.

Fourth of July:
I can’t tell you how many complaints I read about the Fourth of July show. Taking the fans out of the norm always sparks controversy and pisses most off. I did enjoy Nicole’s Film Noir from 2008, so one would think I enjoyed this parody but since I was looking forward to a nice Brady BBQ, I was a little disappointed at first. After a while, I got into it. I’d only seen part of “The Social Experiment,” which I didn’t care for, but the twins who play Johnny and little Theo stole the show. I smirked seeing Kinsey playing a part considering the actress was in the movie. Chad was fun to watch as the lead, and Ari Zucker stole the show for me in each piece she did. No surprise there. The only other film I’d seen in this parody was “Black Swan.” Loved it. Hope stuffing cake into her mouth from the trash bin was cute, and I did enjoy Peter Reckell’s portrayal of the old geezer in “True Grit” and the salute to Steve (Patch), though I had never seen it. Never saw “The Fighter,” either but I loved seeing versatile Judi Evans playing somebody closer to Bonnie Lockhart again! How hilarious was it that Maxine was one of the sisters? I love that they’re incorporating her into the stories more. EJ was quite fun out of his Pee Wee Herman suit and trying hard to do an American accent in his silly backwards hat and baggy pants. Brady made me laugh, and seeing his chest was a treat, and last but not least, I don’t think we’ve seen Roman get this much airtime in years! I hope means we’ll see more of him.

The parody was at times awkward to fit together but it was creative and I applaud that. What did you think of the DOOL movie spoof?

Taking down the DiMera’s.
The rest of the week revolved around paying back EJ and Stefano. It moved pretty fast but because it still felt more plot driven, than anything. Sami punching EJ in the face twice was so well executed, but again, can’t somebody punch her in the noggin too? Those painful bouts of whining aggravate me until I want to hit her.

Days of our Lives Spoiler Video Promo: Who Sees The Two Rafes?