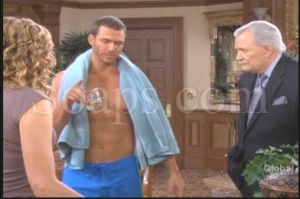 Dynamic duo?
Vivian was adorable as always, discussing with Gus how much her son is like her. She and Quinn are going to work together to take down Carly, which could be fun. Not that I want Carly taken down but seeing Vivian in this capacity is fresh and exciting. I really like Kate’s scenes with Quinn, who doesn’t stand down when she gets in his face. I’d like to see Quinn and Vivian stay. I’m concerned that the show will be a dreadful bore without a few criminals. I’ve always enjoyed “DOOL” for the campiness and worry we’ll lose that if we have less villains.

Back to Carly. Oh so caring and sweet Jennifer doesn’t want to believe that her BFF is a drug addict, but all signs point to it. Jenn must be the most naive woman in Salem or perhaps the world. Even my sweet mum would have raised an eyebrow and waited for the truth after hearing the white powdery substance found in Carly’s room was Aspirin.

Nic Nic’s chemistry.
Once again, Nic Nic has chemistry with yet another character in Salem. She and Maggie’s scene at the pub was fantastic. I don’t think we’ve ever seen Nicole admitting to her faults or confessing that EJ uses her to get to Sami. She also came to the conclusion that she needed to let Sydney go, which I felt was the healthy thing to do, along with demanding the divorce from EJ. After talking with Faye, she’ll likely be the one to break EJ and Taylor up, which bodes well for her backstabbing sister.

EJ obviously feels exceedingly guilty for RoboRafe killing Faye as he should, so will Nicole even have to do much to break them up? It looks as though EJ has done it all on his own. Vote in our DOOL poll where we ask if it’s EJ’s fault!

What fun it was Friday to see Nicole being taken to SPD, all the while poking fun at herself and her situation. As she was strolling away, seemingly without a care, we were treated to Victor’s quips about how he likes watching Nicole go off to jail. Did you have difficulty concentrating on the show with Brady standing around shirtless? Yep, Friday was the highlight of the week.

Rafe.
Rafe was a hoot coming on to Kate in order to keep her out of the DiMera mansion while Samanther and Bope worked their magic inside with RoboRafe. I liked the chemistry between Kate and Rafe. I remember enjoying the first kiss between Nicole and Rafe, so is my problem with Safe just Sami? She’s not a strong character anymore and I might prefer him with a stronger woman.

Deputy Hope and her special ceremony?
Let’s back up a little. Was Hope lying to Taylor when she told her she was deputized? I don’t recall her being deputized. Matt seems to think it happened while she and Bo were having sex... Is she back on the force or is he too lazy to get a real cop to help? I thought that Corday said Hope was going to go through some major changes in her life. I saw none of that. I saw her meandering around for a bit baking cookies and then "pow" suddenly she’s deputized again.

How ironic was it that RoboRafe’s confession stopped short of naming the DiMera men? Isn’t that always the way of Salem? The Brady’s either lose or screw something up! Bo needs to wipe the smug look off his face and remember he’s not a good cop!

Why did Detective McCarthy, who nobody knows or cares about, be the one to question Dario about the night he was seen on the pier when EJ was beaten? Roman could have just as easily done this, and who was it who placed Dario at the scene and not Melanie? I hope Dario’s not going to take the rap.

Eventually EJ’s going to remember that Brady is the one who beat him up. Daniel and Melanie must know this. I’m not sure covering it up is going to help. In fact I’m a little concerned for what’ll happen once EJ does remember.

Lexi sure took her time telling "Father" his son was almost dead and the timing couldn’t have been better – or worse, depending on whose side you’re on. Mary was about to tell Stefano about why his decanter was damaged.

The graduating class.
So downplayed, but for good reason – nobody cares about this class. How sad that it’s not the actor’s fault but Higley’s waste of them. Kinsey drove Gabi insane with her nattering about her lack of money, when all Gabi could do was think of ways to get Will to bed in order to alleviate her insecurities. Caroline thought the reason Will put her off sex is because he doesn’t want to fall into the same mistakes Sami made by having 20 kids from 20 different men, all when she was under the age of thirty, but you and I know the truth. Gabi’s too feminine for our little William. Speaking of gay characters, I liked "Sonny" within the first few minutes of his arrival on the pier, though I would much prefer they called him Jackson. There’s only one Sonny, this isn’t "General Hospital," and the name doesn’t suit.

Days of our Lives Weekly Video...