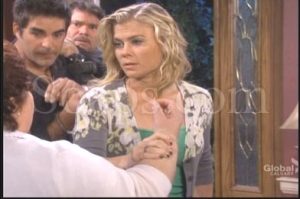 This week was about new love, new careers, beat downs, shake-ups, and a twist thrown in for good measure. Carly was snorting lines, Brady was getting his drink on…We also had a bit of drama off screen, which you can read about here: Mark Hapka is not returning to DOOL. Find out what stood out for me…

Meddling:
Kate’s always been a meddler but it’s been a while since I’ve seen her in action and I admit to feeling surprised she harassed Jenn for dating Daniel. I guess I thought Kate had moved on with Stefano and seems happy, so why still a woman scorned? Age and happiness in love haven’t changed her meddling side. She’s still a naughty girl. I wondered if this was foreshadowing a return from Lucas or if it’s another random storyline generated in the mind of Hackley.

Is Brady a Drunken Coward?
I’m referring to this thread. “Fight,” in our DOOL forums. This never once occurred to me while watching the graphic violent scene that probably belonged on “General Hospital” more than “DOOL.” EJ DiMera has done countless reprehensible misdeeds and was finally getting a little bit of payback for being partially to blame for Arianna’s murder and a million other things and yet we’re more worried about whether or not Brady’s a coward? I love the DiMera family. I love their history and I still think EJ deserved payback. I can’t even list the crimes he has gotten away with. Same with Stefano. Sure Brady had that big-assed goon start things off, which wasn’t even necessary, but he wasn’t just trying to beat up EJ, he wanted to kill him. EJ wouldn’t have even gotten his dainty fingers dirty at all. He’d have hired “The Cleaner” to get rid of Brady. Is that cowardly too or is that merely ‘delegating’?

Ask Dena Higley. Not much has ever made sense written by her hand. “Bghwme” thinks “Brady is full of rage, and has been for a long time. He has spent many years standing on the sidelines while the DiMeras have hurt, destroyed, tortured, and manipulated the people in Brady’s life. The drinking and the drugs, I think were Brady’s way of trying to cope with this deep-seated rage. I think a lot of the things mentioned in this thread should have been brought up so that we (the audience) could better “feel” Brady’s rage. The whole thing would have made much more sense.”

Is Nic Nic sniffing around Brady again? Did she really ever stop loving him?

Was the fight too violent for you? Vote!

Client #1:
When Rob met Chloe I momentarily expected him to pound on his chest and grunt, "Me Rob, you Lola." If he dragged her by her hair to his cave, I wouldn't have been more surprised. I dug that she drugged him but we haven’t seen more of this story since Wednesday and I’m curious as to how she gets out of sex. Will she talk Rob into thinking they had the time of their lives? How will she fare when she gets client #2?

Matt and I really like Quinn Hudson. The actor is playing a great villain. It’s a shame to see him go. His scenes with Kate are something I can really get into, and as expected, he really gave Kate a piece of his mind after she trashed Chloe’s "good" name. Is he really going to fall for Chloe? Will they ride off into the sunset together? With the new writers aboard, your guess is as good as mine.

Oddity:
Why did Daniel take Jenn to the free clinic with him? Why wouldn’t he have dropped her off at home rather than have her sit around waiting for him to do whatever it was Mel called about? Why would she want to go with him?

Sapphire Club?
Is this not one of the worst sets you’ve seen? It reeks of 1970s tacky décor and looks like Tony "The Butcher" Lombardi should be working the kitchen. While flipping through the stations, one could mistake "DOOL" for "General Hospital" if they came across a scene there. Can’t there be an extensive fire and "The Butcher’s" wife, "Angelina "Stelletto" Giovanni Lombardi gives it a face-lift?

Loose cannon:
It’s almost as though Hope was playing pretend cops and robbers the way boys did as kids. She’s no longer a cop yet wanted to be the one to expose RoboRafe’s secrets. Since she is not a cop, why is Hope, working with Bo to take RoboRafe? Sami I can see, since things have progressed to this ‘sting’ operation. Did you see the way Sami manhandled my poor sweet Mary? All in all I found the truth serum is always fun to recycle but the recreation of the crime was really exciting, especially when Sami fell down the stairs.

Wabi:
I feel for the actors who portray Will and Gabi. There’s not enough plot development for me to give those two more time in my column. Yet. I will say it's annoying how whiny Gabi has gotten about the nonexistant problems in their relationship. I wanted to tell her to stuff a sock in it.

Maybe I should stuff a sock in it and we should all go off and have an incredible weekend. Please feel free to open up about your own comments regarding the week.