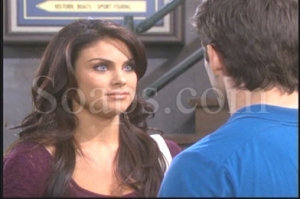 This wasn’t one of my most favourite weeks in Salem, except perhaps for Nicole bitch-slapping Taylor – twice. It was a busy week in reality. A few “DOOL” actors were let go including Nadia Bjorlin, Bren Foster, and Tamara Braun. I broke the story yesterday that we gained Mark Hapka, who will return as Nathan Horton to steal Mel away from Dario, since Francisco San Martin’s been let go. Still more changes to come. Let’s hope that includes the new writers shredding all of the recycled scripts in Higley’s file cabinet.

Mommie Dearest?
I don’t think any of us has ever thought of Vivian Alamain as ‘mommy material’. I’m not a fan of rewriting history but in this case, Aunt Vivi has been gone for years. It’s not a rewrite. Who’s to say she didn’t have a child with some menace to society in Australia? I love Vivian and would have loved to see where this could go. I’m eating up every moment of her screen time until her departure.

Stockholm Syndrome?
If Chloe wants to sell her body for money, that’s her prerogative but to be forced into it is vile. Even though Quinn showed Chloe ‘proof’ of her taking money for sex, she can twist that story to have him hauled off to jail for pimping. She can also get a voice recorder and tape their conversations, but she’s not that bright. Instead, she stared at him and got weepy. How do I loathe weak females? Let me count the ways… What should Chloe do? Vote!

I can’t help but remember that there was another sex tape of Melanie and Philly floating around that Steph watched in 2009. Whatever happened to Stephanie anyway? So basically, Higley was well paid to recycle some part of each storyline every two years. After all, she wrote EJ evil every second year. For years ending with an even number, EJ was ‘good’. Years ending in an odd number, EJ was back to being his evil self. Shall we pick one and stick to it?

It's a boring slice of life?
What the hell is going on that I have to be subjected to the minutia of the life of uber-boring Hope, in a soap opera? Hope brought the Little Adventurers to the Horton home in the middle of the day to bake and make crafts when the kids should be in school. Doesn't Salem have a Truant Officer? The whole scene puzzled and bored me to tears. I never want to see this on my screen again.

"Switzerland," one of our forum posters says, "While I don't like Taylor, Nicole's wailing "you slept with my husband" rant is ridiculous! And by the way, someone could only slap me once. I'd give them a freebie but stick your hand in my face twice; I'd knock [your] Nicole's teeth out!"

I think Taylor went to the Brooke Logan School of "How To Let Others Walk All Over You," when it comes to Nicole.

I wouldn't allow anyone to slap me around either, Switzerland but Taylor is a wimp. No gumption. It made sense that she'd let Nicole slap her. I rooted for Nicole both times, frankly. Nicole's sister had sex with her husband. Whether or not EJ loves Nicole, this is a 'sister's thing'. If you can't trust your sister, I'm not sure who you can.

"War Of The Roses."
In addition to Kate and Stefano, Maggie and Victor, EJ and Nicole share possibly the best chemistry on "Days" right now as a couple, even though they're estranged and living like Michael Douglas and Kathleen Turner's characters in "War Of The Roses." I can't get enough of these two sparring. The whole scene was well done, from Nicole throwing vases at EJ's noggin to EJ crouching behind the sofa. I also thought it was a nice touch having Abby and Chad overhear the madness and call the cops! Having Bo stroll in all smug while EJ was manhandling Nicki was great for effect, though even if Nic Nic had admitted their fight was physical, EJ'd get a slap on the wrist and be out of jail within the day. She really is EJ's bitch.

Prom.
Does the wardrobe team have a hate-on for Will? Did you see that fugly shirt they had him in while he was visiting his 'bestie'? At any rate, it was very sweet of Will to make Gabi's day by bringing the prom to her but it did nothing whatsoever for me. There wasn't enough buildup and with all of the sick and dying at University, I was surprised when Melanie took time to take off from her post to deck out Gabi's room. Just how long is her lunch break? Really, if the powers that be want me to give a rat's arse about the younger crew, they need to do a lot better than that.

See you on Twitter @soapoperafan, and Facebook and for goodness sake, don't forget to read SOF's Matt's DOOL Musings!