Couples thrown together.
Taylor deluded herself this week into thinking that EJ has changed based on nothing - what, the fact that she stopped him from killing when she bumped into him on the pier? It was a fluke, of course. He’d have killed Rafe if she didn’t show up. She needs to know that when a man tells you he hasn’t changed, you listen. Far too many women brush off what men say in order to continue with their little fantasy of who they want their man to be. It causes nothing but strife in the relationship from that point on. So far, Lexi, Nicole and EJ himself have told her who he really is. Is she really that thick, starry-eyed, or just wants rough sex from EJ? Poor Nicole. Her sister has really gone and twisted the knife further. Even though Nicole knew what she was getting into, Arianne Zucker never fails to make me feel heartbroken for her. Kudos!

Melanie and Dario don’t have that… 'je ne sais quoi' that Mel had with Philly K. For the umpteenth time, I’m begging that the writers do not go there. We do not need Dario. If it isn't working out, why drag it on?

I really liked the easy scenes with Maggie and Jenn discussing her fumbled date after Jenn took off that hideous makeup, combed out the hideous 1950's bouffant and got rid of the silly dress. After finding these two awkward together for so long, Jennifer jumping into Daniel’s arms and making out with him wildly was pretty hot. Who knew? I prefer her covered in root beer in sweats too, and I'm sure Jack does as well. Wait until he gets home. Oy. I’m not looking forward to another love triangle.

Sami, Rafe and the impostor.
End this storyline as soon as humanly possible. Now that we don’t get to at least hear RoboRafe’s humour, which is the only reason I liked the story at all, I’m no longer interested. I would like to know the impostor's name. Is it Javier? I say get Javier to admit to killing Faye, and put him in jail and but this story to bed.

Hey, at least we got to see Faye's ghost this week.

I’d love to hear your thoughts on what happened on "Days" this week and how you feel about the shake-ups with the actors. 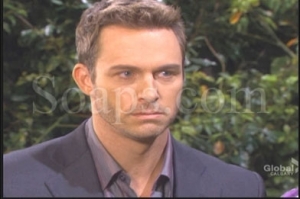 Big news this week is that “DOOL” let go of Crystal Chappell and Louise Sorel and are bringing back Drake Hogestyn and Deidre Hall after four long years. We’ve seen the show bring brilliant talent to the show only to ruin a character beyond recognition by either not writing for them or by rehashing the past so much that fans stop watching. That’s the case with Crystal and my dear dear Louise. Is the recycling and weak writing a thing of the past after August? With Corday at the helm, I’m not sure how much optimism I have left. And who else will we lose and gain during this month? I know we’re to see more of Roman, Abe and Lexi, and there are a few more changes on the horizon in regards to budget and story. I’m both nervous and a small part of me is hopeful, but do we really need to bring back past characters in order to tell a good story? It always feels as though the powers that be blame the actors instead of their own tired writing.

Kingpin Quinn:
Our smarmy friend Kingpin Quinn has been listening in on Chloe’s private discussions about her son with Justin. He’s smirking at videos he took of himself having nookie with Chloe. No wonder he didn’t care that she called him by another name while bedding her down. He’s using her for, well, not just sex but it’s obvious that he’s going to blackmail her into a big mess in order to pay off the growing bill for those bespoke suits. I have no name for the new restaurant the couple dined in but it was circa 1970s. I didn’t care for it at all. Give me Salem Place. Did you like it? What did you most enjoy this week from the little things such as new sets and Quinn watching his homemade porn? Vote in Soaps.com’s poll.

“Quinn, this place is not big enough for the both of us.”
I waited years and years for madame to return to my screen for comedic relief. I’ll try to control my sobs of anguish at the thoughts of not seeing Louise Sorel as Vivian on “DOOL” anymore and not to see cute Gus anymore and simply get on with it. Quinn and Vivian know each other from the past. All I will say is that this story has potential as does the talented actor who portrays Quinn. The actress has stated that there are some great strong scenes on the way with Quinn and Vivi. I’ll savour the time we have left with her, knowing that she’s not planning on returning to the show even if asked. I’m crushed and Corday and Higley have nobody but themselves to blame. I may be a little bitter on this one.