Interview: Eric Martsolf Talks Days of our Lives With Soaps.com 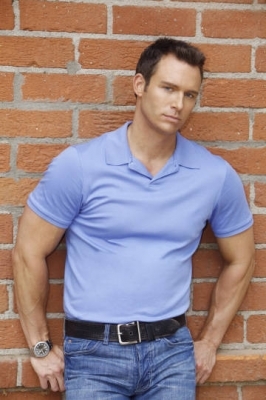 “He’s kind of blinded by his addictions.”

Soaps.com recently spoke with Eric Martsolf about his character’s current circumstances, as well as what’s to come for Mr. Brady Black on “Days of our Lives.”

Soaps.com: Brady recently kissed Melanie [Molly Burnett] and then invited her to stay at his house. Is Brady developing romantic feelings for Melanie or just looking out for her?

Eric Martsolf: [laughs] Yeah, classically if a guy tries to kiss you and then invites you to his house you would draw a conclusion. It’s funny, Melanie and Brady have a very interesting relationship. When I think about them, I think about the movie “When Harry Met Sally” and how you have the question as to can men and women be friends without the romantic thing always seeping in there? But I think the really cool thing about Brady and Melanie is they’ve always had a friendship before anything else and they’ve always had each other’s backs. Unlike a lot of soap couples that are magically thrown into each other and connected by some strange force of nature, I kind of like the way they’ve come together and they’ve taken their time with it and it wasn’t something that happened overnight. I’m actually a fan of Brady and Melanie, but as to whether it will continue to be romantic story that really remains to be seen. I personally think they have such a brotherly/sisterly dynamic that it would be hard for many people to accept that because it’s already been firmly established. But, who knows? You never say never in soaps.

Soaps.com: How do you think Brady would feel if she moved on with Dario [Francisco San Martin]?

Eric Martsolf: I don’t think Brady likes Dario too much. I think he thinks he’s trouble. He doesn’t like his attitude. He doesn’t like the way in which he came into town, you know, came into trouble right off the bat. He’s ultra protective of Melanie. There’s almost a fatherly instinct he has at that point. You know, ‘You’re not going to mess with my family, pal. Take your dirt somewhere else.’ He’s not too happy about him hanging around that’s for sure.

Soaps.com: And what about Nicole [Arianne Zucker]? Does Brady still love her? Do you ever see them getting back together?

Eric Martsolf: [chuckles] Once again, never say never. The way I perceive Brady is he’s an addict. He has an addiction to chemical substances, he has an addition to women, he has an addiction to power. When you have an addictive personality, you want what you want regardless of how you have to get it. I think Nicole is a perfect example of a woman that has given him 14 reasons to kick her out of his life, but for whatever reason a guy like Brady Black can’t. He just always seems to have a welcome mat for Nicole, no matter how abruptly she left him the last time. I’m attributing that to his addictive personality. I also believe there are genuine feelings for her. I believe he cares about her, but he keeps going back. He just can’t say no.

Soaps.com: Moving on to his family, what’s the relationship now with Brady and Victor [John Aniston]? Is it as hateful as Brady sometimes makes it seem?

Eric Martsolf: I don’t think it’s a hateful relationship. If anything, it’s a relationship founded on love. I believe Victor and Brady do love each other as a grandson and grandfather should, but Brady, once again, it goes back to his addictive lifestyle. He wants the power. He wants to prove to everyone that, ‘I can run a company. No problem. Even if I have to step over my grandfather. I’m going to do it anyway.’ So he’s kind of blinded by his addictions. That’s an interesting story because so often people who are addicts lose sight of what’s really important. In this case, he’s lost sight of his relationship with his grandfather just to get to the power. But, he doesn’t hate his grandfather by any means. If anything, he wants to prove to him that he’s a man, he can stand on his own two feet. He just has a ridiculous way of showing it.

Soaps.com: Will Titan ever change hands back to Victor?

Eric Martsolf: Just recently it seems he’s been softening up a little bit, but if I had my way I would keep Brady pretty hardened. I don’t want him to flip flop so easily. As far as Titan going back to Victor, I don’t think that’s coming any time in the future. I could be wrong. I don’t scribe the show, but if I could put 20 bucks down I would venture to say Victor’s not going to get Titan anytime soon.

Soaps.com: Then there’s Sami [Alison Sweeney], who has a lot of her own drama going on, but Brady hasn’t been around much for her. What are your thoughts on that and will that change?

Eric Martsolf: Honestly, on a whole other level I hope that does change. I’ve enjoyed my relationship with Alison, the brotherly/sisterly connection that we’ve had. It hasn’t been explored that much recently. Of course when you have two Rafes [Galen Gering] running around, her plate’s pretty full, so I don’t know how much time she has left over for her brother. Often in soaps too much story ends up being a sacrificial lamb for relationships that sort of gets swept under the carpet. I would love to investigate more time with Sami and Brady because I think that’s a vibe the show doesn’t have a lot of. That brotherly/sisterly bond. I welcome it and I know Alison welcomes it too. All they got to do is write it. [laughs]

Soaps.com: What are your thoughts on Brady’s relationship with Vivian [Louise Sorel]? How far would he go to get rid of her?

Eric Martsolf: Where has Vivian been lately? I don’t know. It seems like she’s dropped off the map a little bit ever since…It’s almost like they forgave each other. ‘Well, I buried you alive. Sorry about that. Okay, I’m going to move on to other pastures.’ I think it’s one of those things where if she attempts to cross Brady’s path ever, he’s never going to take it lightly. He’s always gonna have it out for that woman. There’s too much history now between the two of them. I think maybe they’ve been keeping us separate on purpose because the town would probably explode. Who knows? They always want to one up each other. God knows what they would do.

Soaps.com: What can you share about what’s to come for Brady?

Eric Martsolf: Without giving too much away? His relationship with Taylor [Tamara Braun] grows. Not necessarily romantically, but they definitely are establishing a trust between one another. That comes into play with EJ [James Scott] and Brady’s relationship, which has never been a tender one. That’s going to be fun to dance around with. Nicole does come sauntering back into Brady’s life. She’s only ever a phone call away. But at the same time, Melanie is very present as well. You have this interesting time where Brady has a lot of open doors and a lot of possibilities, as to which door he’s going to go through and travel, that remains to be seen. I’m looking forward to that as much as anybody, to see where he ends up falling. Because right now it’s a crap shoot.

Soaps.com: It sounds like you have a lot of fun stuff coming up.

Eric Martsolf: I hope so. From your mouth to God’s ears.

Soaps.com: Finally, what are your thoughts on the state of Daytime in light of All My Children and One Life To Live getting cancelled?

Eric Martsolf: I’m a Daytime fan and anything that negatively impacts the Daytime genre I’m not going to be a fan of. What’s business is business, but soaps are Americana. They’re a pure form of it. It’s sad that had to transpire. I for one hope to God that’s the end of the trimming of the fat so to speak.

Days of our Lives Stars At Days In...