Helping the underdog.
I haven’t forgotten that Maggie’s the first person who ever cared about Melanie, so it’s easy to see why Mel’s feeling so abandoned. I thought it was a good reminder of how Melanie was brought up, but also thought Maggie was smart to remind her protégé that she has two parents who care about her now. She’ll have to get used to sharing Mags and start leaning on the rents and herself for support.

Who is Chloe?
Though Victor and Maggie’s spat about Chloe was expected, at first I was worried this would spell disaster for them. I was surprised and strangely offended at how Maggie made Nancy and Craig up to be rotten parents who as Maggie put it, "didn’t even go to her wedding." I felt protective of them because this doesn’t provide a true sense of who the Wesleys are. I don’t see Chloe the way Victor or Maggie sees her. So much has been that doesn’t really fit in with who she really is. I see a woman who leads with her emotions, and has issues with communication, thus allowing more mistakes to be made. I agree with Victor’s assessment that she means well but I’ve never seen her as a "slut" or "bitch."

Mel and Dario.
Still no thoughts from Mel about her miscarriage, which I find very strange. I did enjoy how enterprising Dario was. When he lost his job he sauntered into the Cheatin’ Heart and practically demanded that Adrienne let him try his hand at bartending. I admire the confidence but is he just staying to get into Mel's pants?

Danifer.
I’ve had moments when I’ve thought they were sort of cute but I still think of her as being Jack’s wife and two days ago he was Chloe’s husband. The kiss didn’t inspire me and I’m still not behind this pairing. They’ve both still got to be in love with their exes. Daniel’s right. They both have rebound fever. Do you smell that? It reeks of desperation.

Don’t throw stones!
Stefano’s reaction to Ciara taking Theo along with her when she ran away was pretty funny. It was touching in a way, because it’s nice to see how much he cares for Theo. I dug how he called Ciara’s parents unstable. Sure he’s likely right, but people in glass homes shouldn’t throw stones! Especially him, since his glass is paper thin. Gotta love Stefano.

Rafe’s mean.
Ciara tells her parents that when Rafe’s not around adults, he’s mean. Allie said the same thing, yet the parents do nothing but mention it in passing. Excuse me while I have a "Twin Peaks" moment.

"Feelings on sunsets," by Jack Deveraux.
I just don’t think Jack would send Adrienne a haiku in a reply to her announcing she just married Justin again. That’s not how Jack works and therefore, it doesn’t work for me. And you know something? Jennifer without Jack doesn’t work either.

That's all I have to say on what went down this week. I look forward to reading your own thoughts.

Care to vote in my Spanish on DOOL poll? After that, you’d do well to check out SOF's Matt's DOOL Musings. Always gives me a chuckle. 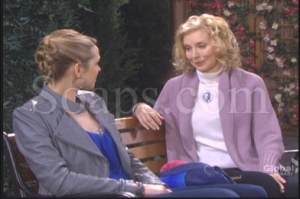 What stood out at me the most this week was the Spanish speaking scenes that seemed to wake me up out of a stupor. The rest of the week was in English but the dialogue was really strange for Taylor. I love marketing too but who uses that many metaphors? And the dialogue was really redundant for EJ. Yes, we get that he’s going to be “kind and gentle” when he crushes Nic’s heart. Sami returned after a long peaceful week and immediately dumped off her kids at Caroline’s -no surprise there- while RoboRafe tried to figure out how he got stuck in that locker. With her. Instead of sipping margaritas on the beach. Let’s break down what else happened and then I’d love to hear your own thoughts on the week.

Eye yey yey.
Argh I only know French and Italian and there was Gabi and Dario chit chatting away in Spanish last week and not a subtitle to behold. If this is going to become a habit, I need my subtitles. I’m a little envious they’re so fluent but it has made me question why Rafe and Ari have never spoken Spanish. I’m assuming it was spoken around the family home and wonder why it has just come up now.

The kiddies.
It was another huge anti-climactic ending to the Theo and Ciara runaway storyline. Bad enough we had to sit through it but then we didn’t even get a pay-off? At least let Leah the homeless prostitute stick around a while. Not in a Willow Stark capacity or anything but Leah interests me… And now that Quinn the pimp’s coming to the show, it seems fitting.

Nu-Taylor:
Tamara Braun is already comfortable in her role as Taylor this week. The powers that be did say they were taking Tay in a new direction and we can already see that. Don’t get too comfortable with EJaylor. They’re not going to last.

Go Nic Nic.
It’s good to see Nicole on top again, even though she’s hurting. It’s funny to me that nothing EJ does fazes Chloe. Did you notice when she learned that EJ was cheating with Taylor she barely batted one of her double-set of eyelashes?

I’m enjoying these ghostly visits from Faye. Keep them coming.

Days of our Lives Saturday Teaser Poll: Stumbling On Rafe