Did you try anything on?
Vivian and Gus can’t catch a break, can they? Their DiMera mansion break-in was stopped in its tracks by Chadsworth. It was a fun scene and of course they had great chemistry. Unfortunately I can’t say the same for Chad and Abby. Chabby does nothing for me and would he really consider an internship at the hospital just for a girl? Spare me. I thought better of him. I only hope he brought it up to Stefano in order to gauge his reaction. I don’t want Chad doing an internship at the hospital. Back to Vivi and Gus. Did you notice Vivian had to warn Gus against trying on clothes at the manse? And later on, she commented that Stefano would have gone nuts if he found Gus in Kate’s closet. She asked if he tried anything on. So if Gus isn’t gay, he’s a cross-dresser. It would be nice if Higley would clarify but I realize with her, it’s too much to ask.

SaRo’s break-up scene in the hole they call a loft was superb.
I thought it was great that Sami bawled RoboRafe out for getting her six year old son to fetch a beer - at 9:00 AM. She must be flummoxed to the bone that Rafe is acting this way. Could you imagine if this was a reality? Oy. Is it terrible that I find RoboRafe funny? He’s horrible and murderous but makes me snigger, nevertheless. I love how she made a list of things she refuses to tolerate from him. Go Sami! EJ of course, really demonstrated the giddy 13 year old girl inside him this week, as he gloated over how he has outsmarted everyone. I wonder how she’s going to take it when she finds out what EJ did to her – this time. How can you top a bullet to the noggin?

Is it my imagination or did Nic Nic look like she enjoyed kissing RoboRafe just a little? And once again, I do see their chemistry.

Keanu and Nancy Drew:
I’ve always loved Mel, even when I disagree with her now and again, but her scenes with Dario are difficult to watch. Though I like that he loves his sister so much that he’d do anything for her, I have trouble drumming up any feeling for him.

What’s up with Bo?
Fans are wondering if Bo seems distant. I see him as being reflective lately because his life has changed so drastically but I’m missing the emotion. This isn’t the Bo you and I are used to. They shouldn’t have told Ciara they had something to discuss with her after school. That never bodes well. Poor kid. Perhaps some therapy. Marlena? I also must be missing something because I don’t know what there is for them to discuss with her. And did you notice that both of them took five or ten minutes to realize Ciara took her pop up tent with her and therefore must have gone camping in the woods? Methinks the hot sex is rotting their brain-cells!

Ciara has email? They 'hope she didn't change her password'? Is that a little bit scary?

With all this talk about Brandon, don’t you want a Brandon Walker return? Vote!

For more news about the One Life To Live Cancellation and the All My Children Cancellation click those links.

Have a great weekend and feel free to comment about your feelings on the cancellations or the show. 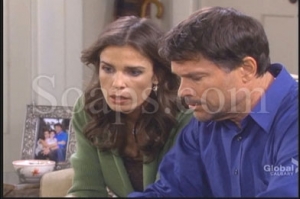 Credit: Did Nic enjoy this even a little? (Soaps.com)

All anyone can think about today is yesterday’s tragic news of two soap operas’ demise. After September, there will no longer be “All My Children,” and after January 2012, “One Life To Live” will go dark forever. This is devastating news not just for the cast and crew, or my staff who will lose out on the work, but for the soap opera genre as a whole. We’re left with four soaps and an empty hole in our hearts. I feel angry. ABC disrespected the soap opera sites by not even sending the press release to us before we all had to hear it on a non-soapy site. If I’m a little grumpy with my thoughts this week it’s because I shudder to think it could happen to us next.

Goodbye, dear Faye.
Oh my poor Faye. She never hurt a fly. I consider her a vet with ties to Roman and Abe, but Higley doesn’t care. She killed her off anyway, and for what? To further a storyline for a freaking Hernandez – or a Hernandez look-alike? I’d rather have seen them send her away again so we at least know the character is safe. What’s next? Killing off Jack Devereaux? I shouldn’t give her any ideas. Instead, we’re stuck with Dario, Gabby and self-righteous Abby, but we’ll never see Faye again. This is why people stop watching.

Bye Steph!
April 6 was Stephanie’s last day in Salem. Her last scene was in the pub with Dario, discussing her arch enemy Melanie. Sort of a slap in the face to the actress and to her fans, non? Nathan Horton got a decent send-off. What makes him so special? Stephanie Johnson was in Salem long before he showed up. Does Higley think Hennig’s fans enjoyed her last scene such as it was?

Please don’t flashback to this!
While I dig random scenes in our soaps, I thought it was a little too random for some unknown dude to show up at the pub and have ‘Open Mic’ night. And why on earth did we have to hear that horrible inappropriate song Chloe sang? “Sometimes I Feel Like A Motherless Child.” Talk about your dark foreshadowing. She’s sure going to feel like a motherless child when Philly K takes Parker and hightails it out of Salem. 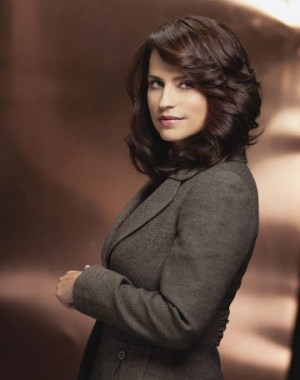