Saro:
Matt weighed in about Saro, saying, “Rafe and Sami are so much more convincing when they fight." Sami and RoboRafe were brilliant in Tuesday’s scene, arguing about Robo’s attitude change and his confidence that Faye will die. How many times did you rewind and play Robo's Samanther murder fantasy?

With the exception of him trying to kill my Faye, RoboRafe’s again had some great dialogue. He's funny! I dig his sparring with Samanther and some of his dialogue is similar to hers. Their bickering reminds me of their time in the Safe house when I really liked them. Perhaps if RetroRafe had more depth or a little more RoboRafe inside, he’d enthuse me more.

It was nice to catch a glimpse of RetroRafe working at building strength and teaching himself how to gain advantage over his opponents by reading “Art of War." I figure it's got to be better than "Mad Magazine." After this storyline is wrapped up, I'd like to see Rafe with a touch of RoboRafe’s humour.

“ejami720" says, “On today's episode when Sami, Rafe 2, EJ, and Taylor were all talking with Lexi, I noticed that when EJ hugged Taylor, Sami noticed them right away! Her look on her face said it all!" I missed this. I wonder how much of a part Samanther will play in finding out about these two. I think Nicole would have suspicions too if she didn’t know her sister was (supposed to be) so perfect.

“Carly," a soap opera fan from our Soap Opera Fan community says, “I can’t understand half of what EJ says. He talks with his teeth closed." It’s true. Sometimes I miss what he’s mumbling on about and have to ask Matt (SOF's Matt's DOOL Musings) if he caught it. Usually we’re both baffled.

I’ll leave you with this..."anita2310" asks, “Has anyone else noticed that every time Taylor speaks she speaks with heavy breathing and it is really annoying. What’s up with that?" 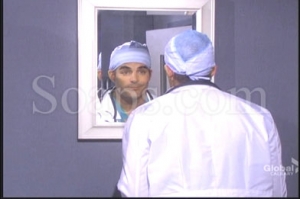 Along with my own thoughts about what happened in Salem this week, I’ve once again quoted a few of Soaps.com’s forum members…

Highlights?
Funniest moment of the week was Chad, Abby and Stefano letting themselves into the DiMera mansion only to be met with Mary scrubbing Faye’s blood off the carpet. That was hilarious. Though I didn’t see much discussion about this, I’d guess the highlight of the week was supposed to be Bo and Hope finally making love, and though it was nice to finally have a supercouple back together, it would have been much more powerful for me if so much time hadn’t passed between them breaking up and getting back together. I love that Hope bought a new ‘Carly Cootie free’ bed.

How do I look?
Melanie’s been rocking those new bangs, but poor Taylor’s been sharing Chloe’s bump-it, making her look like a model in a 1980s advert.

Why is it that Sami’s hair is always stunning or at least put together with odd braids, twists and curls, while Nicole and Jennifer’s hair is ignored?

The clothing is uninspiring from Maggie’s big bird yellow blouse with the silver lame scarf, that awful grey pleather jacket they force Nic to wear day in and day out, but my big beef is Jennifer in orange. I miss the old wardrobe team and the budget that got the heave-ho with them.

Model turned PI?
Who is the gorgeous private eye we saw at Java and can she stay a while? Hey, it’s not like it’s the first time the show has hired somebody based purely on looks, but I think she can act, too.

What comes next?
Is my Philly being straight with Chloe regarding custody of Parker? I have my doubts and so does she, though she’s paranoid to begin with. Still, since he’s on his way out of Salem, who thinks he’ll be taking Parker along with him? Vote for how you think Philly should exit. When Chloe moved into the Kiriakis manse, I thought there was a possibility she’d wind up back in Brady’s arms. I’d have been interested in that, too, but we hear there’s somebody else coming on canvas for her so does this mean we will see Brelanie? I have seen some strong reactions against the possible pairing of Melanie and Brady. I’m not sure how much older he’s supposed to be but it can’t be more than ten years, which is hardly robbing the cradle. Age is meaningless when you’re in love – not that they are, but it wouldn’t bother me if they were put together. I’ve always enjoyed their friendship but my concern is that the show is once again putting a pair together just because of chemistry, which doesn’t always work.

“Team Carly.”
I polled you asking if you preferred Daniel was with Carly or Jennifer. At first I saw Jennifer in the lead but as of today, Carly is winning, but only by a mere 6%. Dannifer seems a little forced. Falling off a ladder into his awaiting arms may have been a nice Hallmark moment for some but it felt awkward and induced some eye-rolling with yours truly. Sure there’s chemistry but they keep ruining it with the dialogue, such as calling themselves, “Team Carly.”

Speaking of Carly, I’d like to thank TPTB for giving Crystal a storyline worthy of her. I really feel for her facing all these demons, including Nicholas not wanting anything to do with her. Poor Carly.

Days of our Lives Video: Interview With Eric Martsolf. Part 3

Days of our Lives Saturday Teaser Poll: What Does Gus Find?