Stefano’s code.
When Gus told Vivian that the security code Mary punched into the system was a jingle he recalled from a childhood sitcom, I couldn’t help but think it must have been the theme to "Three's Company" or "Scooby-Doo."

Problem is, we are still not closer to knowing exactly why Vivian wants to take down Stefano or Kate. Maybe I’ve just forgotten. I don’t know but it’s not much fun to watch my Vivi like this.

Coma?
Poor Faye. She was merely in the wrong place at the wrong time and because of EJ and Stefano, she’s been thrown down the stairs and fighting for her life. EJ and Stefano really know how to pick their staff of goons. So now let me guess. Faye will go into a coma and we’ll never see her again, just like we haven’t seen poor Anna since her hospital days. This is how vets are treated, yet the Hernandez clan and EJaylor love is always on the front burner.

SaRo.
I had technical issues so couldn’t watch the episode of Robo trying to force himself on Sami, but I got the gist of it by reading Matt’s recap. I dug Sami’s interaction with Kate afterward, which was probably a highlight of the week. In light of their problematic history together, I found the scene of Sami confessing to Kate that her marriage is failing to be poignant. I like them being on the cusp of civility.

Brelanie.
Is it just me or are they going down the road of having Melanie being torn between Duhrio and Brady? Some would argue she’s too young for Brady. I’m not sure I agree with that but they’ve such a good friendship that I’m worried if they were put together, it would be ruined.

Vaggie.
They had a cute scene together once again and they kissed a little. I’m not really sure where these two can go together. They don’t have the same intrigue that 'State' has so I figure it might be fun to see them in an adventure together. Beyond that, what is there for these two to do in order to hold our interest?

I know something that will hold your interest. SOF's Matt's DOOL Musings. 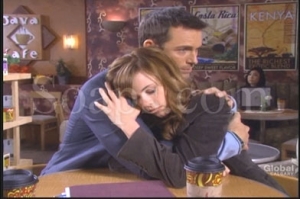 Credit: Why focus on State? (Soaps.com)

Nothing really happened this week. There was a lot of randomness such as looking through photo albums, discussing mundane household issues such as radiator issues and the speculation about how to punish a 6 year old effectively. Really boring. Nearing the end of the week, the episodes were incoherent.

Oh EJ.
He calls himself a DiMera and he can’t even manipulate a woman into his bed without screwing things up. He should have kept his mouth shut about wanting her as his mistress until after he got some at least and since he didn’t, he used yet another tactic to bed the swooning female by telling her he’d stop chasing her. Boy is she ever taken in.

More repetition.
What can I say about Ciara running away? One all the kiddy storylines with similar themes, this doesn’t inspire much sympathy. Ciara’s crocodile tears did nothing for me either but it was pretty funny that she and Theo were caught trying to scale a chain-linked fence to Melaswen.

The scene in SPD between Bo and Hope was a page out of the dialogue used during Ciara’s kidnapping. The drawn out discussion of Ciara’s punishment made me start searching for vodka. Is this the result of Christopher Whitesell being fired or leaving the show? And why won’t “DOOL” simply say whether or not he was let go? Why the secrecy and why keep Higley on? As one of our posters, “FatherJohn” says, “There have always been fan wars with “Days.” There has never been a universal want for one couple. There has never been a universal love or hate for an actor. There has never been a universal hatred of a villain. James E Riley was hated by some and loved by others, even though he arguably saved the soap from cancellation in the late 90’s. I have never seen one comment about anyone loving, or even liking Demon Hackley, for once in Days history, I think we have a universal hate. No one likes Hackley! How does she still have a job?” Please vote in our poll. Thoughts on Dena Higley.

This week while Bope was discussing their family, they left out Chelsea and Shawn D. I’d really have loved if they called once in a while and if Bope remembered they had other children.

Cracked.
It’s more obvious than ever that Barly’s relationship was on the rebound, but now I’m realizing more and more that she basically let Bo shoulder her issues and never dealt with murdering Lawrence. She finally cracked and drugged herself. She’ll get hooked on the drugs and my guess is that Daniel could be her next saviour. Bo can’t because that ship has sailed. 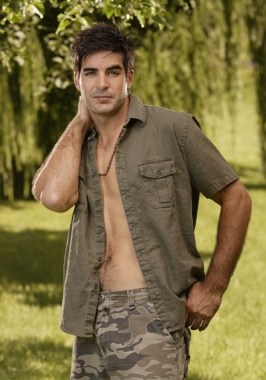