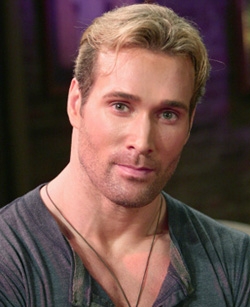 You read it right! All you American Gladiator fans are in for a surprise when Mike O’Hearn (“Titan”) guest stars on Days of Our Lives Friday March 14.

What happens is that Kate (Lauren Koslow) finds Chelsea (Rachel Melvin) drowning her sorrows over recent tragedies at Cheatin’ Heart. Kate tries to stop her grand daughter from drinking but Chelsea feels she’s to blame for so many of the recent Brady losses. Chelsea doesn’t listen and this is where O’Hearn comes in! He offers Chelsea coffee in order to try to sober her up but she refuses and storms off. Later, Shawn (Brandon Beemer) and Belle (Martha Madison) show up at the bar searching for Chelsea but O’Hearn tells them get in touch with Kate, who will find Chelsea for them.

O’Hearn’s acting credits include a leading role in the just released “National Lampoon TV –The Move,” “Barbarian,” “Keeper of Time” and coming out this Spring “Tumblers” and “Captain Ultimate.” Ironically, many ladies may recognize him from the cover of their Topaz romance novels! (Quick, go check your hidden stash!)

Where are DAYS' Ivan & Vivian?

The Voice Semi-Finals Results-Show Recap: The Final 5 Revealed… Though We Kinda Only Needed a Top 2