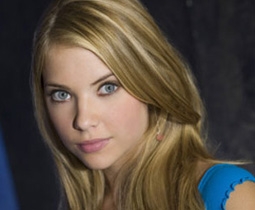 Guess what she’s up to now?! Ashley Benson (ex-Abbi Devereaux, Days of Our Lives) has accepted another role in another teenage cheerleader movie with Tatum O’Neal and Jenna Dewan called “Fab Five: The Texas Cheerleader Scandal,” based on a true story about five out-of-control teenage girls. Benson will portray “Brooke Tippit” who is the captain of the cheerleading squad and daughter of the principal, “Lorene Tippit (Tatum O’Neal). Benson’s on screen friends will be known to be rule-breaking teens who get away with all sorts of bad behavior. Based on a 2006 true story in a Dallas suburb of McKinney, the story will be shocking and is set to be out summer of 2008 on Lifetime.

Benson recently starred in her first film, “Bring It On: In It to Win It.” It’s out on DVD!

Soaps.com sends Kudos to Benson for taking a chance on film and for her new role!

Where are DAYS' Ivan & Vivian?