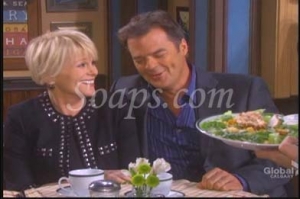 Super Brady.
Brady has turned into a caricature of himself. That cartoon superhero voice, the strong stance, the narrowing of the eyes. He’s usually pretty fun but I’m finding it a bit over the top right now. You know what’s missing? Romance or nookie. What are your thoughts? Vote on what Brady needs.

No candles!
Sami taught RoboRafe the art of “making love to Sami” which is completely different than the ‘wham bam thank you Sam’ sex. She loves ordering people around so it was extra titillating for her to teach him but it came off as pretty sexy. How come Safe has never been this sexy and spontaneous before?

Do I have to say goodbye to Jack ‘n’ Jenn?
I like Jack and Jennifer and them as a couple as well. This divorce storyline doesn’t feel right to me. Jack’s not even in town and you know it’s only written in order to get Jenn single to date Dr. Feelgood who I’d rather be with Carly. The one-sidedness is a slap disrespectful of the couple’s history. Does Higley get that the fans who care about this couple don’t want to see this? Is she even a soap opera fan? Sure, Jack ‘n’ Jenn have always had their ups and downs, but this time I’m worried that since they can’t get Matthew Ashford on the show that the couple is doomed. I realize Jenn needs a storyline but I’d rather not have her on the show than tear up the couple.

Deluding himself.
Poor delusional Nathan. He’s been carrying on all over Salem as though he and Mel are already engaged when in fact she looks pained each time he is with her. He has become a male Stephanie, which I suppose he sort of deserves since he lived a lie with her, but this isn’t the note I wanted to see him go out on. I dug how Steph really got in his face at the pub. I prefer her bitter than whiney. Go Steph!

Engaged!
Adrienne and Justin are so adorable. “DOOL” is doing the right thing by reuniting these two and I can’t wait for their wedding.

Nu-Abby.
I really like Ashley Benson’s Abby, so wasn’t sure how I’d feel about a recast. It’s going to take some getting used to, but nu-Abby seems fine. She’s a touch more mature or cosmopolitan than the other Salem teens, which I’m assuming is supposed to come from her spending time in Europe. She wears more make-up than the Salem teens which is different and reminds me a little of how Melanie was when she first came to Salem, throwing a monkey-wrench into the monotony. I don’t recall Abby being this judgmental though.

The scarf.
Matt and I are wondering why that magical scarf keeps making an appearance. If that’s not bad enough, after it was lying on the dirty floor of Java, EJ held it to his face and sniffed it. Freak! Yech! I was complaining to Matt about it and he said, "Maybe he'll start making essence of Taylor perfume in his dungeon lab." I’d rather see that than the gaping blank looks EJaylor gives one another. By now they should be accustomed to seeing each other’s face and can say hello without drooling or hanging their jaws to the floor. The scarf even made it into a fantasy. "Would you like to see what I can do with a scarf?" Barf. Taylor does. Though I state the obvious when I say EJ’s a swine for what he’s doing, she’s worse, considering she’s Nicole’s sister. Ordering him to admit he’s thinking of her was an invitation and then when the guy accepts and tries to kiss her, she slaps him. Mixed messages much? A good sister would have lied about her feelings for him.

Another one… Are you surprised as I am that Lexi’s pushing EJ toward Taylor and then Chad toward Stefano? The family that she has complained about since the dawn of time? Truly baffling.

Memory drug.
Is Rafe’s memory erased or not? Is it official? Can I start calling Rafe John Black?

Vaggie kisses:
They’re really cute, but I’m still not convinced they’ll work and neither is Maggs.

Homophobe?
RoboRafe was pretty funny this week. I dug Nicole and Robo’s chemistry, enjoyed the scene with Robo downing half the bottle of sprinkles and teaching Johnny to fight. It seemed unrehearsed as did Johnny’s laughter, which was adorable. I didn’t care for the 'fruity' comment Robo made about Reid’s name though and can see Sami’s going to get her own knickers in a bunch when she hears what he has done ‘this time’. Oy.

Vivian’s back.
I wish they had a little more to do than take revenge on people, although it could be fun to see them find out about RoboRafe before anyone else. Who was that masseur? Oh...My back!

Boo.
Carly was in a medical conference in Toronto this whole time and I never saw hide nor hair of her. I’d have taken her to tea at the Windsor Arms. Matt told me on Twitter, "I saw her. We were having martinis in the same burlesque club." Bah! There’s always next time…

Have a great weekend!