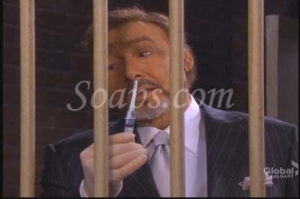 These are the “Days” of my week from February 28-March 4:

Bghwme says, “I fell asleep again while trying to watch the show. It just doesn’t hold my interest.”

Cherished guest.
EJ toasted to the guests at his wedding to Nicole. He referred to some of them as “Cherished guests,” which I found funny. I told Matt, who replied, “Who were those people? Random diners?” It’s not like EJ has friends. Seriously, I wondered why Philly was even there when things started off. Since when did a Kiriakis celebrate the wedding of a family who tried to murder him? The wedding was a dreadful bore but according to Nicole, the wedding night was filled with “unconventional sex,” which just grossed out poor delicate Taylor.

Enough of scarf flashbacks and enough of EJ and Taylor gaping at each other. It’s been beaten to death. Agree or disagree. Vote!

Boy can RoboRafe put away those nuts.
Did you see Robo break the head off of Allie’s voodoo doll? I thought it was a sure sign that Sami’s head is next. It seems as though the volatile hobo is getting closer to being the one calling all the shots. I predict that soon Stefano and EJ will be wishing they’d never hired him. (This isn’t a spoiler.) RoboRafe really is a testament to Gering’s acting skills. I can’t believe how nasty Robo is compared to the real Rafe and how he has that lumbering down to a science. It’s almost a caricature of Rafe.

Sami was awesome Tuesday afternoon when she went at the doppelganger for his inappropriate behavior with Stephanie. It was humiliating for her and really worrisome. She went from having it all to living with a deranged construction worker. Though the real Rafe would have done the MRI for the kids, she’d have been better off to ask the creeper to do it for sex. He’d have done it in a heartbeat.

Meanwhile, Stefano wanted to tarnish Sir Galahad’s reputation, and smartly injected Rafe with a memory erasing drug, which I doubt works. I think it’s from his stash from 1985 when he used some to erase John Black’s memory. I love how Rafe called Robo a sock puppet and asked, “If I don’t have a memory, who is going to be the brains of the robot?” Even Rafe calls the impostor a robot!

The horror of irony.
Melanie rushed off after Philly chastised her for trying to steal his baby and she ran right into Nathan’s arms, where he once again embarrassed himself and assumed it meant she was moving in with him. And two seconds after Philip showed up she started cramping up and then we were to gather she lost her baby during that weird montage in the hospital with the really distracting anti-climactic and frightful 1980s music. They didn’t actually say she did until the next episode and then they acted as if we’d already known. Bizarre. I felt for her and no, not because of the ridiculous music or montage. Even though Kate manipulated her into trying to take Chloe’s kid, she saw the error of her ways before she even miscarried, which I respected. After all, her daddy’s fiancée got naked with her hubby and had his baby. I think we could drum up some anger and resentment if that happened to any of us! This whole ordeal has given Melanie some growth and I agreed with her decision to divorce Philly, even though I liked Phelanie. I feel for poor Philly who just doesn’t seem to get it where his child is concerned. He’s perfectly clueless but brought up by Victor and Kate, it's understandable. I’ll really miss Jay Kenneth Johnson who has always added depth to Philly.

Wabi. Gill.
If they (Gabi and Will) can’t even tell each other they love one another then I don’t believe they do. Nor do I care. Give Will more to do than this. The kid can act.

Bratty Abby.
Nu-Abby returned to Salem for good and she’s pretty feisty just like Jenn, though she sure is a judgmental which is the opposite of her mum. I loved that Chad put her in her place and let her assume that Johnny was his child, considering he was a father to Grace, and I'm sure was pissed. Has dear Abby been sheltered or just brought up by boarding schools?

Will the best suited actress for the part please stand up?
I’ve seen a few comments on Soap Opera Fan Blog from fans who prefer Livingston over Braun based on looks alone. They don’t think Braun is as pretty as Livingston. Since when did "DOOL" become "Top Model" and since when do looks matter over talent or proper casting? Whoever works in the role best is who I want to see on my screen.

Casting calls and more hiring?
We still haven’t opened up Arianna’s case file at SPD. Is this new guy Bren Foster (Rafe 3) going to be the one to find Ari’s killer, or is he a new love interest for Chloe? Do we really need yet another character when Higley hasn’t bothered to write for Adrienne, Justin, Vivian or Gus, or Caroline or Roman or any others who I’ve simply forgotten by now?

If you haven’t yet read Matt’s Musings today, you’re in for a treat. I laughed until tears were streaming down my face. SOF's Matt's DOOL Musings.