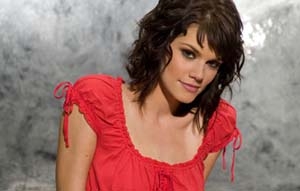 It seems Rachel Melvin just can’t get away from sororities and dead bodies. On Days of Our Lives, she plays Chelsea who was mixed up in the cover up of a murder at her sorority house. In her upcoming movie, “Legacy,” a dead body is found at a sorority house and the three most popular “sisters” become the prime suspects. Sound familiar?

Directed by Irving Rothberg and starring Haylie Duff, Rachel plays the character of Julie in the dramedy slated to be released sometime this year.

Rachel Melvin hails from Phoenix, Arizona and moved to Hollywood after winning $600 playing casino bingo. Appearing in commercials and guest starring in primetime shows such as “Jack & Bobby,” “Summerland” and “8 Simple Rules,” Melvin got her big break on Days of our Lives in 2005.

Soaps.com can’t wait to see Rachel in her new role and wishes her luck in all her endeavors.

Arianne Zucker Returns to Days of...

Joseph Mascolo to be Honored by the...