History repeating itself. History repeating itself. History repeating itself…repeating. Repeat.
I liked RoboRafe for about five minutes when the script writer gave him some funny lines. Now he’s just mean and pervy and not in a good way. He does have Rafe down pat in several ways. I mean they both lumber around like Goofy, with the angry caterpillars they call eyebrows arched, yet oddly expressionless at the same time. When Allie expressed her concerns that once again, Boozo the Clown wasn’t treating her well, I felt Sami should have pressed for details or suggested therapy for Rafe. Not just for that but all the boozing the guy is doing. He’s always working on a beer and in front of the kids. So bourgeoisie. Sometimes I think Sami’s so daft he could be shooting heroin and she would be blind to it. Wasn’t he told to lay off the booze altogether? Soon he won’t be able to hide behind the concussion and he’ll have to do away with Samanther. It’s enough that Stefano did this to Marlena for years but history repeating itself doesn’t bode well with me.

The stereotypical soap opera wedding.
There were a lot of filler flashbacks in Thursday’s wedding episode. Way more than I thought necessary, though it was good to see Kate and Stefano reminiscing about their wedding at Chez Rouge. It’s strange that neither Stefano nor EJ have discussed how Stefano was trying to get rid of Allie, who they seem to have forgotten is Kate’s granddaughter. It’s also strange that Kate has been in exactly one scene with Kate in the past year. I digress. Kate was the highlight of the wedding with her comment about Saint Taylor. "What a delicate flower. I haven’t seen anyone swoon in years." It was the regular soap opera wedding filled with the usual interruptions and I felt for Nicole who has unfortunately fallen in love with EJ when the predictability of the show tells us she’ll end up screwed over by him once again. Sure, I love their chemistry and they’re loads of fun to watch, but I’d rather they were equal than Nicole getting shi… crapped on once more. While I wasn’t surprised that Saint Taylor told Kate she may stick around if Nicole needs help with her monster-in-law, she did surprise me by telling EJ how much she’s been pining for him. Where did her loyalty go? She should have kept her yap shut and told EJ it was a chance meeting and she’s not interested. Much like how I'm not interested only I'd be telling the truth.

Those are my thoughts on the week. What are yours? Feel free to post and have a fabulous weekend.

Come see us on Twitter @soapoperafan, and Facebook. Don’t forget, it’s Daytime Emmy Pre-nom day. Find out which actors from DOOL put themselves up for a Daytime Emmy. 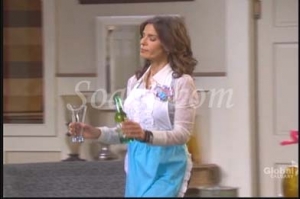 Let’s just get right down to it today.

Ah mature love…
The Maggie, Victor and Parker scene Tuesday was really charming. Parker is adorable and smiled the entire time and stole my heart. It was also great to see Vic and Maggs inching just a little closer. Kudos to “DOOL” for not pushing these two together uber quickly. I’m enjoying the pre-courting.

Doctor Love’s at it again?
Why did we have to sit through that nonsensical argument Daniel and Jennifer had when she was released Thursday? Oh I envy those who can fast forward. It was so random, unnecessary, and I think my ears bled a little. I almost had to down some booze myself to get through it. I’m really tired of Daniel getting hot for each of his patients (save Bo). First Chelsea, then Chloe and now Jenn? (lisamarie2010 just reminded me that Kate’s another of his patients turned lovers!) Did you see how he insulted her? His patient? The only saving grace was that she got him to finally see past the end of his nose where Parker’s concerned. I’m actually curious about what’s going to happen to Parker, Philip and Chloe as a result of her attempted suicide.

If I hadn’t already seen Nadia’s great work as Lara the drunk in Venice, The Series, I’d have been shocked to see how she has transformed our little ‘deer in the headlights’. Loving the lack of make-up, the jeans, the crapola hair, and I’m really feeling for her. Loving her! So believable. Give me more!

Anti-Climax?
Bo and Hope decided to go bowling on their ‘first date’. “Bowling?” I asked of Matt of Matt’s DOOL Musings, who replied, “That’s what she was missing when she was in the pen.” I’m just so disappointed. Couldn’t they have been included in the Valentine’s Day celebration with few sweet words and a flashback or two to remind us of their love? They’ve been apart so long that there is no real reason for me to root for them. A memory would have helped. Sure Friday we were entertained with some flirting and making out, but it’d have been more realistic to have them discuss their relationship, his with Carly and how he can flip from Hope to Carly and back in the blink of an eye. I need more emotion thrown in, otherwise I can hardly care too much about the reunion. How about you? How do you feel about the Bope reunion? Vote here. I feel that storylines that are too neatly tied up rob the fans. I’m also not too keen on seeing Hope go from detective to manservant. Remind me again which women on this show have careers? Just the female hospital staff? It’s not 1950 anymore. The show needs to get with the times. Hey at least Bo’s back on the SPD. Maybe he’ll attempt to find Arianna’s killer or at least mention that they’ve closed the file on her case.

I dug how they rewarded Ciara for faking sick from school instead of using a little discipline. Is this a sign of the times or a sign of what’s to come with Ciara?