Taylor hit it spot on when she sniffed EJ’s scarf (creepy) and said it was all so "lame and corny." And how is it that she knows half of Salem?

The show recast the role. I didn’t feel as though Livingston was right for the part, myself, and Tamara’s a great actress but why do we need a Taylor at all? I’d rather see Brandon return but if they insist on having Taylor back at all, she should be a schemer, considering that’s who EJ’s attracted to. Then again, why not bring Ava back instead of bringing Tamara Braun back as another character, especially when she won an Emmy for her role as Ava? They don’t need more characters, but there are a few more on the way, including Nicholas Alamain. I’d rather see the current cast written for.

Redeeming Sami?
Greek Godess thinks it’s possible the RoboRafe storyline is meant to redeem Sami. "A lot of people have detested Sami because she shot EJ and was acting very self righteous about it." It could be but I’m not sure it’s redeeming her for me just yet. Especially when she goes into panic mode. *shudders*

The domino effect.
Mel ‘sort of’ admitted to Kate that the so called goodbye kiss was not a goodbye kiss at all. Kate thinks it wasn’t since Mel was still attracted to Nathan. Well maybe so but she did make a choice. Still, she never should have written the letter to Nathan on her wedding day, or married Philly, or kissed Nathan, but that’s all water under the bridge…I wonder if Mel’s plan to scheme against Philly and get Parker from Chloe will backfire and she’ll wind up wanting him again. You can’t turn off feelings of love that easily, but you can make a choice. She has waffled in the past so we’ll see what happens this time.

Ferrari?
Stefano gave Kate a Ferrari for Valentine’s Day. Not exactly romantic or something I’d ever personally want but Kate seemed intrigued. I’d much rather have seen him give her a thoughtful and intimate gift from the heart. Still, they’re adorable.

Chad DiMera:
I like that Chad took the DiMera name for work purposes and I like that he’s been sulking around Salem. He has good reason to be depressed. I feel for him and like that he’s randomly showing up everywhere looking for work. He should be Salem’s "Where’s Waldo." He could show up in every scene and give me a chuckle. He’s become sort of campy, which I think I like!

Join Soaps.com on Twitter @soapoperafan, "like" Soaps.com on Facebook to dish on Days of our Lives, all the other soap operas, Glee, Grey’s Anatomy and Vampire Diaries! 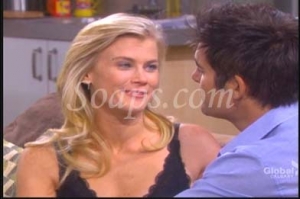 The big news this week is that DOOL Co-Head Writer Christopher Whitesell is no longer with the show. The studio was quick to tell me that this doesn’t necessarily mean he was let go. I’m not sure if this will be good for the show or not. This week wasn’t too bad once you fast forwarded through the nausea inducing EJaylor scenes and the Rafe impostor storyline. Not that I could, but I’ve been dying for more scenes with the vets, which currently run as commercials between the other two storylines. I am happy, however, that the show celebrated Valentine’s Day and made it interesting.

Go Gadget sex drive.
RoboRafe had only been living with Sami one night when he started complaining about the lack of “alone time.” Dude’s getting paid handsomely to get naked with a pretty blonde and needs to stop whining. Leave that to Sami. Have you seen the way he ambles around the locker room? Matt, of Matt’s DOOL Musings figures they stitched him together from Philip’s old body parts. Biggest turn off line of the week? Him telling Rafe, “I’m heading in for seconds, hot rod.” Ew. Please just don’t make Sami preggers again. I don’t think I could stomach it. I have to admit I felt for poor Robo/Dodo/Hobo Rafe when EJ abused him and called him a simple little moron. Not that I disagree and I do suppose it is hard to find good help these days. Still, hiring this hobo was a bad idea. Didn’t Stefano learn from Susan? Honestly, and the way the guy beat Rafe up was really scary. Did they find this guy through Warden Jane? Does Sami have anything to worry about? How about the kids?

Bimbo thinks there’s such a thing as love at first sight?
I didn’t see one small spark of chemistry between Taylor and EJ. Did you see chemistry between EJaylor? Vote here! I found their meet-cute awkward and don’t think that dear sainted Taylor wouldn’t fall for a DiMera anyway. Besides, she’s far too loyal to Nicole to do anything about a simple attraction, so why the storyline? Because we can see Nicole and EJ are falling back in love with each other and the show can’t write one month without a love triangle.

From the fans: DOOL1965 says, “This was the corniest Hallmark moment ever.” Ejaminow says, “I thought no one could have a bad screen time with EJ but Taylor did. The scene and acting was off for both parties. The dialog was just awful. It was all just so lame. I expected more from EJ and the writers are just killing him. First they want to make him the ultimate bad guy and now they are making him lose his mind over some ninny.”

Days of our Lives Video Promo: Nicole Wonders Why EJ Is Lying

Days of our Lives Saturday Teaser Poll: Another Kidnapping