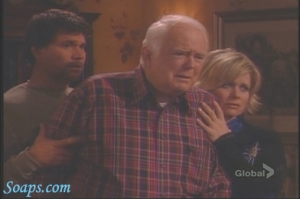 After a twenty-five year run, Frank Parker, who portrayed Grandpa Shawn Brady Sr. since 1985, will be exiting Days of Our Lives in a final way.

Frank Parker started out in television in the 1970’s where he played ‘Clifford’ on “CHiPS”. He played in The Young and the Restless in 1972 and went on to portray ‘Paddy Kelly’ in 1980 on General Hospital, had stints on prime time television shows since and ended up on Days in 1983.

Parker’s departure will tie in with Patsy Pease’s (Kimberly Brady Donovan) brief two day return Wednesday February 27 for Grandpa Shawn’s funeral. She hasn’t been seen in Salem on contract since 1996, but has made brief returns to Salem in 1998, 2002 and in 2003, so this should be a great reunion to counter a sad farewell to Salem’s Patriarch.

Soaps.com wants to wish Frank Parker all the best in his future and we welcome Patsy back, even for a few short days!