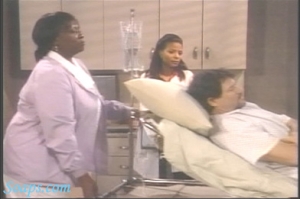 There have been quite a few recent additions to the medical staff at Salem’s hospital lately, including Dr. Carrington and a team of nurses, but viewers are soon to see a face already familiar to them as a nurse. Aloma Wright will be arriving in town as Nurse Maxine. Wright will be known to many avid TV watchers as Nurse Laverne Roberts on Scrubs. She played the sarcastic nurse on the hit medical comedy from 2000 until 2007 before she was killed off as the show’s finale loomed. When the show was surprisingly renewed for another year, it’s creators brought her back as a new character. Of course, while on Scrubs, she already got to work with Jay Kenneth Johnson, better known as Days‘ Philip Kiriakis, when he played sexy Dr. Matthews.

The fifty-eight year old actress has become a staple on television since the mid-nineties. She’s played a slew of nurses, judges, nannies and grandmothers on everything from Judging Amy to Providence to Power Rangers in Space. A graduate of the American Academy of Dramatic Arts, she currently has two film projects in production: My Friend My Hero and Dress 2 Impre$$, both expected to see release within the next year.

Wright will make her first appearance on February the 22nd when she shows up in Steve’s hospital room.

Days of Our Lives Newcomers

Kevin J. Ryan Lands on Days of our...