Kevin J. Ryan Lands on Days of our Lives 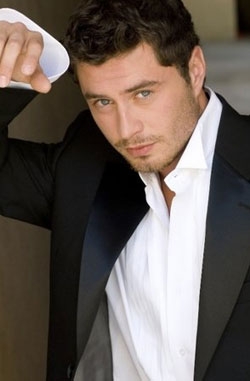 Shedding new light on the Brady/DiMera feud, Kevin J. Ryan made his soap opera debut last week as Sean, bodyguard to the recently revealed to be alive Colleen Brady. While some of the other actors portraying Irish characters may be working with a dialect coach to perfect their accent, Kevin’s brogue is the real deal. I recently had the opportunity to talk with this true Irishman about what it’s like to be on Days of Our Lives and just what’s in store for him and his character.

Moving to Los Angeles just four years ago from the small town of Dublin, Ireland, Kevin found it to be a bit overwhelming. His first thoughts were, “Too many people, too many cars, too many casting directors. It was huge. It was just incredible.” But after getting his bearings, Kevin hit the ground running. Having been featured on “Entourage” and in “The Fast and the Furious 3,” among other things, he has acted in eight independent movies over the last two years and is now enjoying a stint on the NBC sudser.

The road to landing a part on Days wasn’t an easy one though, as it is apparently littered with dead bodies. “I spent the last, probably nine months in NBC and I went for a couple different characters, some of which have been killed off already,” he chuckled. While he finally found the right fit in Sean, Kevin wasn’t an obvious choice due to the fact that, “They were looking for a 6’2 sort of burly Irish guy that came across very intimidating and the whole lot.” Coming in at only 5’10, Kevin auditioned against actors who were 6’2 and 6’4, but impressed the casting directors by bringing what was emotionally needed for the role.

Coming from Ireland, where they don’t air American soap operas, Kevin wasn’t particularly knowledgeable about the show, but with her extensive resume, he certainly knew who Shirley Jones (Colleen Brady) was. Having thoroughly enjoyed his time working with her, the Irish actor referred to her as a “sweetheart,” and shared an amusing story about their first day together. “When we first met…I was telling her what a good job she did on the accent and she was telling me what a good job I did on mine! I asked her how long was she working on hers and she said, ‘About a month or so.’ Then she asked how long I was working on mine. I said, ‘Twenty-three years,'” he laughed.

Aside from his positive experience with Shirley, Kevin has also enjoyed working with the rest of the Days of Our Lives cast. Relating another story about his first day, Kevin shared, "Because it was the 'Irish day,' [as] we called it; because we were filming my first day, they were all speaking in this sort of Lucky Charms Irish accent, 'Doodledy, doodledy, do. Top o' the mornin' to ya,' and that sort of thing. So we had a great laugh. They were very warming, welcoming, and the whole lot."

With a background mainly in film, Kevin found working on a soap to be a bit different explaining, "With movies it tends to be a bit more all over the place no matter how much you plan it. A soap opera, you go in there and I mean people have been working on the show for so many years it's more like a factory, manufacturing kind of thing (laughs). That's probably not the right word to use on it, but you go in there at 7 o'clock, you're out at 4 o'clock, and there's not one matter in between that delays it or anything. It's just so, it's just clockwork. When you're working on a film it tends to go on for, you know they'll say 8 o'clock is your call time, you won't get started to 12, it'll extend out until the night and all that. It doesn't happen on a soap."

Since the cast and crew have been working together for so long, Kevin finds the behind the scenes dynamic similar to that of a family and feels, "It's such an incredible environment to be in and it's so comfortable as an artist, as an actor to be able to work in that environment."

As for the future of Sean the bodyguard, Kevin shared that he still has a few more episodes to tape and there is talk of his role becoming a recurring character, but with the writer's strike, it's up in the air. However, he let me know that he gets along very well with the producers and the directors and they are pushing for him to become recurring. While he's definitely interested, he says he won't know more until the strike is over.

Until then, he has other projects to keep him busy, as he has two movies set to open around 2009. In "The Search for Caravaggio," he plays Cleopatra's lover and in "Tyrone," he plays a young man recruited by the IRA in pre-peace treaty Ireland, who comes to L.A. on a mission to gather funds and ship arms back to Dublin under the guise of running an Irish bar.

Kevin also has 4 or 5 more films due out and is heading back to Ireland this month to talk about other possible projects. In addition, he auditioned for another soap the day before we talked, but unfortunately couldn't tell me which one.

So even if his character on Days of Our Lives becomes a casualty of the writer's strike, this certainly won't be the last we see of Kevin J. Ryan.

I'd like to thank Kevin for taking the time to talk with me and wish him well on all of his many projects.