Post-Partum Depression.
A lot of people still don’t realize Chloe’s story is about post-partum depression and that she's not just being a crappy mother on purpose. It’s a real depression and the show is handling this story really well. Kind of hard to name-call when she’s in need of psychiatric help, non? Especially after Friday’s er...mishap where she practically burns down the house and the baby along with it. Ey yey yey, as Stefano would say. At any rate, Melanie found Chloe trying to catch her breath on the pier and demanded to know why she wasn’t taking care of her baby. Please. It’s just too forced and Melanie being sanctimonious doesn’t bode well. Chloe doesn’t need to be at her baby’s side 24 hours a day. It’s healthy to get a sitter. I felt it too contrived – more than usual - and I felt for the breakdown writers who probably have nowhere to go with this storyline but down.

"Licorice_423" says, "This whole mess can almost be traced all back to her [Mel]. If she would not have married someone she sorta loved instead of being with someone she did love, none of this might have happened."

I agree. It was also a pretty nasty fantasy scene with Mel telling Chloe’s son that his mommy couldn’t love him, but she never stopped. *gasp* Though Mel’s more fun as a bad girl, that was more of a DiMera move. On the other hand, I was practically spellbound by Chloe, who wears misery better than anyone I can think of at the moment. She bitched Mel out something fierce. I love bitchy Chloe, not the weak bored housewife. Speaking of boring...

Tedious Taylor.
We have a Carrie Brady already. Besides, she’s too saccharine and it comes off as disingenuous.

From SOF comments, "Aurelia" says, "Not impressed with Taylor at all. She seems very young, very unsure and not at all a good fit for EJ or "DOOL." Casting Directors got this one wrong." Not to mention that every scene Taylor is in has the same script. Lexi, Sami and Brady are all telling her to stay in Salem while Nic Nic, Aureila and I want her to take a hike.

Do you? Vote about your own thoughts on Taylor.

Many are wondering…
How did Chad get a job at Cheatin’ Heart when Adrienne turned him down for being too young? Because he used the DiMera name this time and on his original birth certificate, he’s shown to be a year older.

"I don’t know what’s happening to this family." - Victor Kiriakis
Me neither but I’m glad somebody in Salem noticed this! Caroline’s hacking into computers, Brady’s planning hostile takeovers and now Bo wants to ditch everything he stands for? Thank-you to the script writer who wrote this. It’s good to know we’re not the only ones wondering what happened to the good and decent Brady family!

Ponder that over the weekend and dish on your own thoughts about the week and I’ll meet you back here next Friday. 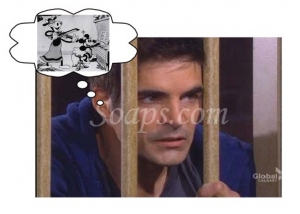 I was impressed with the sex this week after this long drought. The two year wait had EJ as giddy as a school boy and RoboRafe was patting himself on the back after taking Sami on a “magic carpet ride.” There wasn’t a candle to behold and it was passionate. Not to mention, Stefano and Kate got back together just in time for Valentine’s Day. That was the highlight of my week!

Speaking of RoboRafe, Matty of SOF’s Matt’s DOOL Musings and I often dish about the show on Twitter to one another while we’re recapping. It keeps us sane. We’ve both been pondering about who RoboRafe was before he came to meet Stefano and EJ.

Me: How does he know he has issues around babies? Isn’t he a creation?

Matt: I don’t know. Maybe he’s half hobo, half robot.

bghwme says, “The fake Rafe reminds me of Bart. Does anyone remember him? But Bart was funny and although loyal to the DiMeras, he was kind of harmless.”

So he is part hobo, part plastic and yeah, he does remind me of Bart a little. I miss Bart! Nearing the end of the week we learned that Robo’s just some random guy that was paid handsomely to have plastic surgery and voice coaching to look like Rafe. *insert joke here* He also likes the word ‘dude’ quite a bit and sometimes he sports a Texan accent. Oh. And he’s hotter in bed than ole Rafey-boy. Ouch.

Bricole wanted me to dish on “What happened to the ESP that Safe stole from Bope? And if Safe are so connected, why was Sami sleeping with the imposter while the real Rafe was trying to send her messages with his mind?”

Father John answered it better than I would have…”The problem was that he was trying to use his mind. I’m assuming that when Rafe tries to complete a thought, he sees a dancing cartoon cow, playing a fiddle, like in the old cartoons.”

Like all of you, I don’t understand why Safe is supposed to be the next Jarlena, or Bope. They’re neither. Why not write them as they were in the Safe house, when I gave a crap about them? Suddenly they have a connection that we never heard of until he was taken prisoner? If they’d shown this off and on for months on end, then I would have embraced it.

“Does Sami realize she has a child name Allie?” – Butterfly52

DOOL1965 says, “Real Rafe will play Stefano’s game and give him information like he wants but it will be false, and Sami will know it’s wrong.”

This is plausible but then what’ll happen is Allie will go missing. Do we need another Sydnapping storyline? Does anyone in Salem even care? Allie’s the kid Sami ignores the most anyway. Why not ship her to Lucas where she’s wanted? 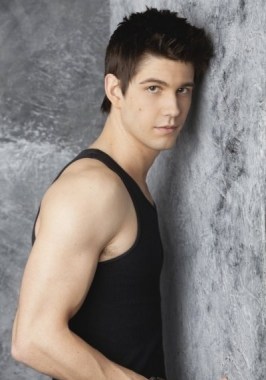 Days of our Lives Stars Help Habitat For Humanity In Miami

Marnie Schulenburg, ‘As the World Turns’ Star, Dies at 37